If you’re a Californian like me, your first association was probably Junipero Serra, the Franciscan friar who founded the California missions and who was canonized in 2015 by Pope Francis. Schools, streets, highways, and natural landmarks here are named after him.

But that’s not where the Oregon Serra got its name. 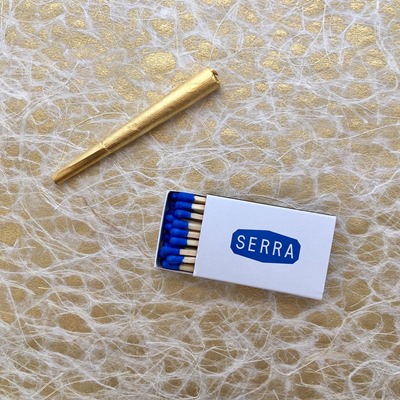 Here’s what the design firm Official Mfg. Co. – which “named, developed, and concepted the entire brand,” and which hand-rendered the typeface (dubbed “Wonky Sans”) – told the Brand New blog:

“Serra” translates from Italian to “greenhouse,” which was our inspiration for many of our aesthetic choices. Our client came to us wanting to create an elegant, high-end cannabis experience, so we used of the materials of a greenhouse as our foundation: glass, iron, brass, plants, and wood.

This is an elegant and distinctive name choice: It’s concise, it’s meaningful, it avoids the industry clichés, and it has a little mystery – not a bad thing when you’re selling products cloaked in a whiff of sin. This is a name you could bestow on a spendy (as they say in Portland) clothing boutique or an all-the-amenities hotel.

I like the name, but the Serra brand as a whole teeters on the tightrope between elegance and preciousness. Here, for example, is the company’s brand director, Cambria Benson Noecker, in conversation with Dope magazine (a decidedly non-precious name):

We purposefully [sic – she means purposely] stayed away from the use of green, and chose Yves Klein Blue as our brand color. Our tagline “Purveyors of Quality Drugs” is a nod to cannabis’ history as an apothecary staple.

Read my other posts about cannabis branding.

* The byline on this story is Peter Danko, which is almost too perfect.

** The steady progress of legalization is being threatened by the current Christofascist U.S. attorney general.

Posted at 06:20 AM in Branding, Cannabis, How They Got That Name, Italian, Marijuana, Naming | Permalink

Ms. Polyglot here immediately knew the meaning they were going for! Yes, it's a good mark, and one fine day maybe it'll even be registrable ...

But "Yves Klein Blue"? I cannot even say that with a straight face.