Word of the week: Debacle

On March 24, Republican Congressional leaders withdrew the American Health Care Act – H.R. 1628, also known as AHCA, TrumpCare, RepubliCare, and RyanCare (after the House Speaker) – a mere 16 days after it was introduced in committee. The bill had been slapped together as a fulfillment of the “repeal and replace Obamacare” promise that Donald Trump had repeatedly made on the campaign trail, and which Republicans had been clamoring for since 2009, when “Obamacare” (the Affordable Care Act) became law. But it satisfied almost no one, and it was clearly not going to get enough House votes to be passed on to the Senate.

What to call this turn of events? CNN said it was “an epic failure.” Fox Business called it a “stinging defeat.” The Washington Post chose fiasco, a bit of 19th-century theater slang that borrows an Italian word for bottle, although the connection with failure is now obscure. On Twitter, conservative columnist Ben Shapiro it “self-beclowning.”

But many observers summoned up a word with French roots and nonpolitical origins: debacle.

Debacle – it rhymes, roughly, with “the cockle” – was borrowed by English in 1802, according to the OED. At the time, it had a specific meaning imported from its French counterpart, débâcle, which literally means “unbarring” and was used to describe the breaking up of ice on a river. 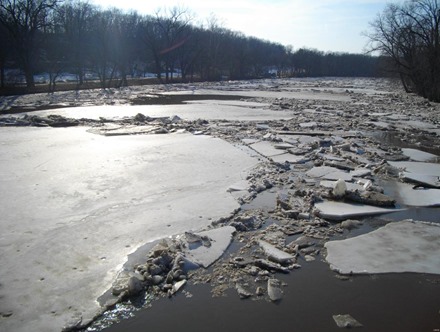 By 1847, debacle had taken on the metaphorical meaning of “downfall,” or “disaster,” which was already present in French. The OED credits this leap to William Thackeray’s Vanity Fair: “The Brunswickers were routed and had fled… It was a general debâcle.”

The bac of debacle comes from Latin baculum, which means “stick” or “rod.” The same root was used to form bacteria (rod-shaped microorganism), bacillus (rod-shaped bacterium), and baguette (a rod-shaped bread, a diamond, or an architectural molding).

New York Daily News (op-ed): “How the Health-Care Debacle Exposed Republicans’ Serious Weaknesses, None of Which Are Going Away Soon”

The New Yorker: “The Health Care Debacle Was a Failure of Conservatism”

Slate: “The Biggest Lesson from the Trumpcare Debacle”

In the serious media, "fiasco" and "debacle" and "scandal" were not words that came up in the eight years of the Obama presidency.

Posted at 06:19 AM in Current Affairs, French, Politics, Word of the Week | Permalink

Greetings from the Skunk River in Ames!

By the way, I can't find August on the map of Iowa. The photo doesn't seem familiar...

The real debacle would have been TrumpCare becoming law.