Word of the week: SCROTUS

In 1879, a telegraphic code book proposed SCOTUS as shorthand for “Supreme Court of the United States.” Ammon Shea, writing for the Merriam-Webster blog, traced the next -OTUS coinage to the 1890s, when telegraph operators began using POTUS to abbreviate “President of the United States.” Both acronyms became widespread, joined in the 1980s by FLOTUS (First Lady of the United States), which may have originated as Secret Service code for Nancy Reagan. “Time will tell if additional -OTUS words continue to join our language,” Shea concluded.

We didn’t have to wait long. In early February 2017, after President Trump lashed out at a “so-called judge” who halted his travel ban, SCROTUS began circulating widely on social media. This tweet appears to be the first to use the definition “So-Called Ruler of the United States.”

@jonathanalter ... SCROTUS stands for "So Called Ruler of the United States."

On February 11, it entered the Urban Dictionary.

The coinage caught the attention of celebrities.

Overheard this new title for Trump: SCROTUS. The "So-Called Ruler of the United States."

And at least one elected official.

DING, DING, DING! Here it is; THIS is what we've been looking for. pic.twitter.com/9tP5BIDJxh

It even crossed the Atlantic.

Glad that McCain is speaking out on these matters. I heard a new one this weekend in England = SCROTUS So-called Ruler of The United States https://t.co/QjIJmUvBhB

But the history of SCROTUS is older and more various – and dirtier – than the “so-called” acronym.

On October 7, 2016, the Washington Post published a video and article about an “extremely lewd” 2005 conversation between Trump and “Access Hollywood” host Billy Bush. “When you’re a star, they let you do anything,” Trump told Bush. “Grab them by the pussy. You can do anything.” That was inspiration enough for comedian Elayne Boosler. She seems to have tried it out at some point before she published a November 21 Facebook post.

SCROTUS, coined during the pussy grabbing tape. Scrotum + POTUS. Though I'll probably never find a keychain with that name on it. https://t.co/F8MM2ge7fN

The scrotum/pussy parallel has a certain satisfying resonance. And Boosler cheerfully defends her claim to originality.

.@Independent My original #SCROTUS meaning was scrotum + POTUS, (pussy grabber in chief), but I like the "so-called ruler" usage 2. THX.

She may be entitled to it for that particular meaning. But linguistic researcher Hugo van Kemenade has found different meanings (in which S-C stands for Supreme Command, Scary Celebrity, Satanically Catastrophic, and other combinations) and earlier citations. This appears to be the earliest.

Sometimes a SCROTUS is a SCOTUS. 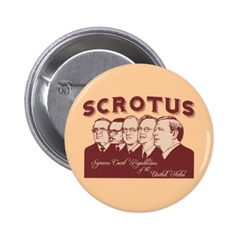 “Supreme Court Republicans of the United States.” Via Zazzle.

And sometimes it’s the name of a videogame character. “Scabrous Scrotus, son of Immortan Joe, brother to Rictus Erectus, is a feared ruthless Warlord, and anointed Protector of Gastown.” From the wiki page for the Mad Max game (2015).

UPDATE: Via Twitter, Aaron Dov Cohen reminded me that SCROTUS had been used in that mother lode of inventive swears, HBO’s “Veep.” Sure enough, in Season 2, Episode 3 (“Hostages”), hapless White House Press Secretary Mike McLintock (played by Matt Walsh) uses it to refer to staffer Jonah Ryan. Jonah is the target of many insults on the show, some of which are collected here.

Posted at 06:00 AM in Acronyms, Humor, Politics, Word of the Week | Permalink

Always a pleasure to hear from Elayne Boosler, who's been funny longer than some of us (not you or I, of course) have been breathing.

Here is the earliest use I can find - from December:
http://www.huffingtonpost.com/debra-jane-campbell/its-the-little-things-fro_b_13642952.html