My new column for the Visual Thesaurus asks: What’s the difference between crisp and crispy? And what do 15th-century language fads, breakfast cereals, and Martha Stewart have to do with the question?

Full access is limited to subscribers, but of course you already knew that (and have already subscribed). Here’s an excerpt:

We may use crisp to describe cold, fresh weather; a starched cotton shirt; a witty line of dialogue; or a dry white wine. We can also use crisp to describe food – bacon, fried chicken, chocolate chip cookies – but we’re equally or more likely to choose crispy in culinary contexts. We even turn crispy into brand names: Krispy Kreme, Rice Krispies, Crispy Critters. There are exceptions, though: Foods with a high moisture content generally don’t make the crispy cut. Apples and certain types of pears may be crisp; they’re rarely crispy. 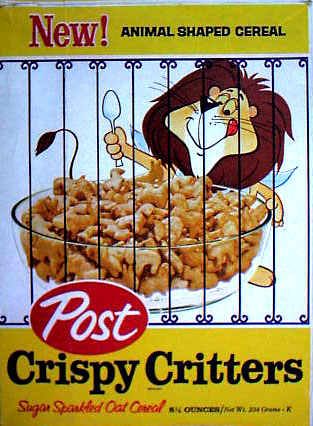 It wasn’t always that way. In fact, crisp and crispy originally meant something else entirely.

Both words entered English from the Latin adjective crispus, which means “curled,” “wrinkled,” or “having curly hair.” That’s what crisp and crispy meant, too. The OED traces crisp back to the Venerable Bede, who wrote around 900 C.E. about “crispe loccas fægre” (beautiful curly locks). Crispy, or cryspy, appeared in the Middle English period, around 1398. It was used in exactly the same way as crisp: to describe curly hair or, metaphorically, some other curling thing, like an ocean wave.