“Lighten up … it’s just a newspaper slogan,” wrote Michael McGough on the opinion page of the Los Angeles Times; he pointed out that the Pittsburgh Post-Gazette and the Toledo Blade both used to call themselves “One of America’s Great Newspapers.” Mother Jones called the Post’s new slogan “a message for Donald Trump.” Slate slapped together a list of “15 Metal Albums Whose Titles Are Less Dark Than the Washington Post’s New Motto.”

The Twitterati had a field day.

From the Progressive Resistance League, whose own motto is “Facts Matter”:

Democracy Dies in Darkness. Thanks for the reminder. We all have to shine light on the things that threaten our democracy. @washingtonpost. pic.twitter.com/yqLxErS1j7

From the producer of Activated Citizen Radio:

The Washington Post's new slogan "Democracy Dies in Darkness" crystallizes in 4 words the danger of Trump's explicit war on the free press. pic.twitter.com/buqu0xqKGZ

From a New York Times reporter:

I love the WaPo, and subscribe, and want to love the new slogan. But it reads a little too much like the tagline for a movie. pic.twitter.com/VarLUS2BKy

From someone whose Twitter bio includes the hashtag #BernieWouldHaveWon:

From the editor of the right-leaning Commentary:

"Democracy Dies in Darkness But I Got This Cute Little Night-Light at Amazon for Just $4.99 and It's Free Shipping Because I Have Prime"

Time magazine’s politics editor had some fun imagining how other media outlets would have rendered the motto: 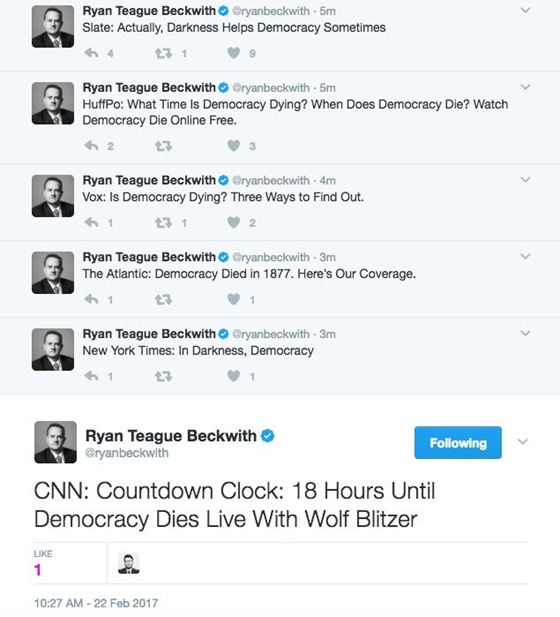 In Darkness, a Democracy Dies

Meanwhile, the Post wasted no time turning the slogan into merchandise, including this onesie (in black only) for very serious babies. (Hat tip: Allison Michaels, whose Twitter bio says she works for the Post.) 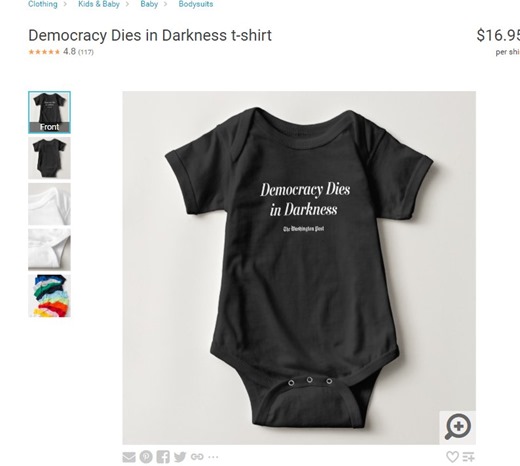 UPDATE: The Post tells the story behind the slogan. Jeff Bezos had heard it from veteran reporter Bob Woodward, whose source “appears to be Judge Damon J. Keith, of the U.S. Court of Appeals for the 6th Circuit, who ruled in a pre-Watergate era case that the government couldn’t wiretap individuals without a warrant. In his decision, Keith apparently coined a variation on The Post’s motto, writing that ‘Democracy dies in the dark’.” Before settling on the new motto, a working group brainstormed “more than 500 would-be slogans. The choices ranged from the heroic (‘Dauntless Defenders of the Truth’) to the clunky (‘American democracy lives down the street. No one keeps closer watch.’) to the Zen-like (‘Yes. Know.’).”

Posted at 07:40 AM in Death, Media, Names in the News, Slogans and Taglines | Permalink

One way of reading the slogan is, "The Washington Post: Democracy Dies in Darkness."
That is, the Washington Post is an example of democracy dying in darkness.
I think it's pompous, vague, and disingenuous.