One of the first companies to appropriate the meme was the New York–based Villa Italian Kitchen chain, which on January 24 ran a spoofy Facebook promotion for an #AlternateFacts pizza with bacon, pepperoni, ham, sausage, cheese … and zero calories. 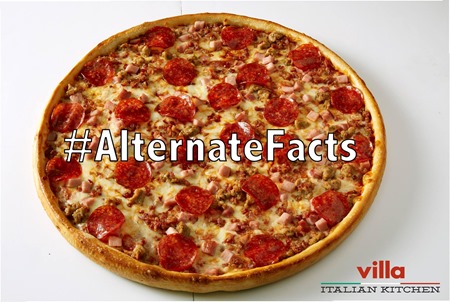 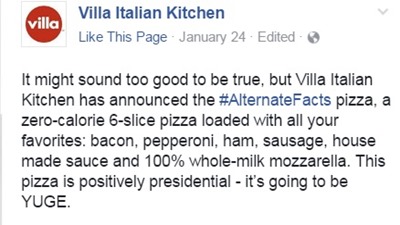 Yes, that’s alternate, not alternative … although Newsweek, among other media outlets, went with an alternative fact of its own and called it #AlternativeFacts pizza.

Here’s the first page of the ad, via AdWeek. 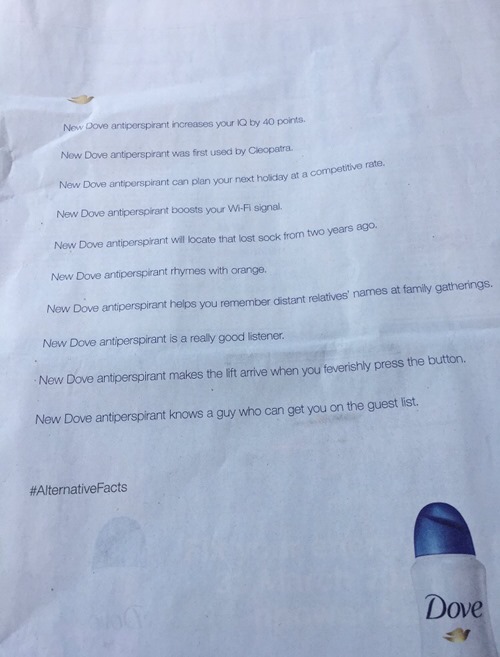 The second page of the ad contains an image of the product and the message, “New Dove antiperspirant cares for your skin like never before” along with the hashtag #RealFacts.

According to AdWeek, “Dove’s parent company, Unilever, has been one of the first to allow its brands to poke fun at the new president.”

Then there was this small-space Facebook ad from the New York Times, the target of frequent tongue-lashings from the current occupant of the White House.

The ad is working.

A record 3 million people now subscribe to The New York Times. Facts matter. Thanks to all who support independent journalism.

And “alternative facts” is having a potent afterlife, wrote Ian Crouch on the New Yorker website on January 27: “Trump’s team knows the political power of a concise, catchy, and easily repeated phrase—and they must recognize, in ‘alternative facts,’ a potential crack in the veneer of Trumpism.” The phrase, he wrote, “is popping up everywhere”:

In the sports world, as Deadspin has pointed out, various N.B.A. coaches have been making a version of the same “alternative-fact” joke with reporters. Mike D’Antoni, of the Houston Rockets, when asked why his team had lost five of their past eight games, replied, “Actually we won all those games. I’m going with that alternative-fact thing.” The Dallas Stars hockey team claimed on their scoreboard that attendance at a recent game was 1.5 million. The comedian Ellen DeGeneres, citing alternative facts, bragged that her movie “Finding Dory” was nominated for an Oscar.

The result, Crouch concluded, “is a different kind of comedy consensus: the ridicule of the majority. A good joke may have the power to diminish the new Trump Administration, especially if it’s one it unwittingly tells about itself.”

Update #1: “Alternative facts is the early frontrunner for 2017 Word of the Year.” — Stefan Fatsis

Pruitt, S. (2017). The Fox Says Cluck: On the Regulatory Benefits of Foxes in Henhouses. Journal of Alternative Facts 3(1).

Shouldn't there be a hyphen to make alternative-facts a "word"?

Susan: For most word-of-the-year contests, a "word" is a "vocabulary item." It can be more than one word; it can be a phrase. For example, the American Dialect Society's 2014 word of the year was the hashtag #blacklivesmatter.
http://www.americandialect.org/2014-word-of-the-year-is-blacklivesmatter