The French source of dossier is dos, which means “back” (from Latin dorsum, which also gave us endorse and dorsal). In Old French, a dossiere was a back-strap or ridge strap of a horse’s harness. How do we get from back to bundle of papers? “From their bulging,” the OED tersely advises. The American Heritage Dictionary has a different theory: the bundle of papers is labeled on the back. 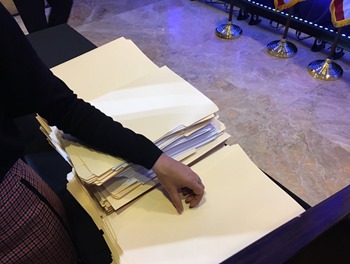 Bundles of papers brought out at Trump’s January 11 press conference to serve as evidence that Trump is turning over his businesses to his children. Are the pages as blank as they appear? Possibly.

The English slang term doss, meaning “a place for sleeping” or, more generally, “sleep,” appears to share the same root as dossier, but is about a century older. It evolved from dorse, in which, in many English dialects, the r is silent. The connection here: When you sleep, you’re lying on your back. Well, sometimes, anyway.

Posted at 07:11 AM in Current Affairs, French, Politics, Word of the Week | Permalink