First, a pronunciation lesson: It’s we-ro-mo-CO-mo-co, according to the restaurant’s website and this video about the original Weromocomoco in what is now the state of Virginia. The name translates to “seat of power”; the place was the principal residence of Powhatan, the paramount chief of some 30 coastal tribes at the time the English arrived in 1607. Powhatan was the father of Pocahantas, subject of the legend about the colonist John Smith.

So how did this name, and this restaurant concept, end up in Northern California? According to an op-ed Coppola published November 3 in the San Francisco Chronicle, it all began with Virginia Dare, a wine brand established on Roanoke Island, North Carolina, in 1835. Virginia Dare wines were made from the local Scuppernong grapes; the product was “sweet and had an oddly pungent aroma,” but nevertheless popular. The brand name was borrowed from the name of a girl said to be the first English child born in the English colonies (in 1587). In the South in particular, Virginia Dare – the historical figure, not the wine – came to symbolize “innocence and purity” as well as “adventure and bravery,” according to a 2000 article in the Piedmont Triad (N.C.) News and Record. The Virginia Dare name has also been appropriated repeatedly as a symbol of white supremacy, about which more in a minute. 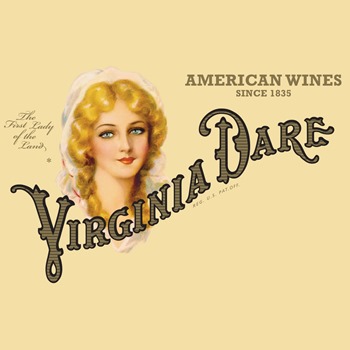 The Virginia Dare brand changed hands several times; during Prohibition it found a home in Rancho Cucamonga, in Southern California. In defiance of the 18th Amendment, winemakers there produced a Virginia Dare “wine tonic.” And they continued to sell wine after Repeal and throughout the 1940s and 1950s. That was when Coppola, as a child, heard the Virginia Dare jingle and saw “the label art that featured a pretty blond girl who seemed out of a fairy tale,” as he put it in his op-ed. As an adult, he researched Dare, the Lost Colony of Roanoke, Powhatan, and Werowocomoco:

More reading and study led to my desire to resurrect this early American wine brand at the site of the former Geyser Peak winery in Geyserville. As the purchase of the property brought with it a permit allowing the development of a visitor center and restaurant, I began to imagine that we could feature Native American ambience and food that would highlight ingredients of America as it once had been. …

Eventually I formed a council of advisers consisting mainly of Native Americans of different tribes from around the country, to bring authenticity and respect for these traditions as well as support for what I feel are important issues of health, youth and education, employment, preservation of language and culture, food and ingredient acquisition, and art. I confess that I used my own imagination and creative powers to bring this project to life much in the way that I would have in making a film.

As for the Werowocomoco name:

I originally wanted to call the restaurant after Powhatan (father of Pocahontas), but was told this name couldn’t be registered. I then thought of using the name Werowocomoco and contacted the Pamunkey tribe in Virginia asking for permission to do this, and their tribal council graciously consented.

This “gracious consent” is of course a good thing, and not easily obtained in a place and time concerned with issues of cultural appropriation. Last year, a small restaurant in Seattle that originally called itself Spirit Animal had to change its name twice because of objections from First Nations spokespersons. The first change, to “Spirit and Animal,” was still too close to the controversial “spirit animal.” The restaurant – which serves “Levantine-inspired” food, not Native American – is now called Corvus and Co, which means “raven and company,” a reference to the original logo.

I’m still not satisfied that “Werowocomoco” is a good name for any commercial enterprise. It’s hard to spell and pronounce; it suggests “werewolf”; it has zero connection to its California location. (Neither does the menu. The pre-conquest diet of California Indians featured a lot of acorn mush, which would probably be a tough sell to Wine County tourists.)

Etymologically it’s glaringly symbolic, with its connotations of virginity and bravery. Not coincidentally, as I mentioned, “Virginia Dare” has a long and fraught history.

The most recent example is the most worrisome. VDARE, established in 1999 by the Center for American Unity, has been described by the Southern Poverty Law Center as “an anti-immigration hate website ‘dedicated to preserving our historical unity as Americans into the 21st Century’.” Its founder, himself an immigrant (from England, like the original Virginia Dare) named Sam Brimelow, rejects the term “white supremacist,” preferring “politically incorrect.” The SPLC begs to differ, citing numerous examples of anti-Jewish, white-nationalist, and explicitly racist content on the group’s website. And in case there was any doubt that the name was inspired by the historical Virginia Dare:

Brimelow says that he once planned to bestow Dare’s name upon “the heroine of a projected fictional concluding chapter in Alien Nation [his best selling anti-immigration book], about the flight of the last white family in Los Angeles.”

VDARE had planned to hold its first public conference in late March at the Tenaya Lodge, a few miles from Yosemite National Park. (Talk about cultural appropriation!) Just this week, the lodge announced that it had canceled the booking:

Unfortunately, at the time of booking we did not realize this group has values that are in conflict with our embracement of diversity among our employees and guests, including people of different cultures, lifestyles, creeds, nationalities, races and ages. We are also concerned that providing meeting space and rooms to this group could be disruptive to our other guests’ enjoyment of Tenaya Lodge and the services we provide to those guests.

As the Virginia Dare Winery’s current owner, Coppola could easily have changed its name and told a compelling story about his reasons for doing so. But he appears to be so entranced by his childhood memory (the “pretty blond girl who seemed out of a fairy tale”) that he’s blind to the downside of the name. Likewise, he’s so smitten with the Werowocomoco story that he can’t see how difficult and confusing the name is to his customers. The ego trip doesn’t stop with naming: According to the Chronicle, the restaurant has no executive chef. Coppola himself is designing the menu.

I have great respect for Francis Ford Coppola as a filmmaker, and people who know wine seem to think he’s a savvy winemaker, too. But with Werwocomoco and Virginia Dare, he has chosen names that are misguided and, to put it charitably, skunked. They are not assets, and should be reconsidered.

Posted at 05:54 AM in History, Names in the News, Naming, Pronunciation, Restaurants, Wine & Spirits | Permalink

Wow, so much cultural appropriation as far as the name, and the effort to paper it over by inverting Native American to American Native. That would've been offensive enough, but no, he had to go all out and keep Virginia Dare? Now? Really?

From the WSJ: The Fragile Economic Foundation of Dow 20,000

"And while there is little sign yet the economy has broken out of the low-growth rut of the past seven years, that too could change. If companies’ animal spirits mirror those of the market, capital spending and risk-taking could revive, dragging productivity higher."

Is this a new term: company animal spirits?

"Animal spirits" has always had an economic meaning. The term was first used in 1936 by the economist John Maynard Keynes. http://www.investopedia.com/terms/a/animal-spirits.asp

Oh, woe. So much glaringly egregious in these choices. I know the man "means" well, but there just comes a time when one needs to put aside one's "imagination" and say "Nah. I'll pass."

This is going to be a huge fail.

We actually ate there on opening day! They're in our tiny town of Geyserville, as is Coppola's Rustic. The menu was quite exotic, but the food a little bland. We're going back soon, to see if they've had a flavor tune-up. No brand tune-up yet, though!