« Bad advertising of the Bay Area: Thumbtack | Main | Word of the week: Elite »

Simone. Two young athletes, both African-American and both named Simone, stood out at the Rio Olympic Games this summer. Simone Manuel, 20, of Sugar Land, Texas, won a gold medal in the 100 freestyle event, becoming the first African-American woman to win an individual event in Olympic swimming. And Simone Biles, 19, of Columbus, Ohio, won four gold medals and one bronze medal in gymnastics, becoming the most-decorated American gymnast in history.

Harambe. In May, a 17-year-old Western lowland silverback gorilla named Harambe was shot and killed after he dragged a 4-year-old boy who had climbed into his cage at the Cincinnati Zoo. A YouTube video of the episode was seen more than 12.6 million times in 48 hours, and Harambe quickly turned into multiple Internet memes, including, perhaps most notoriously, “Dicks Out for Harambe.” There were also Harambe hoaxes: One maintained that a baby gorilla at a Chinese zoo had been named Harambe McHarambeface (see Fictional/Literary names, below); another falsely claimed that thousands of people had written in Harambe’s name in the U.S. presidential election. 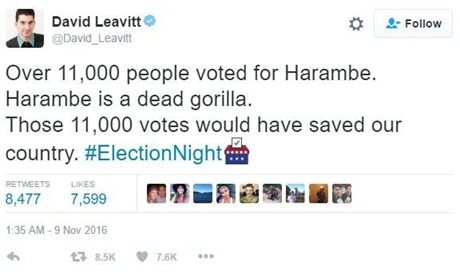 “Harambe” is a Swahili word that translates to “working together”; it’s the title of a 1999 song by Rita Marley, widow of Bob. Update: For more on Harambe as rallying cry, see John Kelly’s post from June.

Drumpf. On February 28, John Oliver, host of HBO’s satirical news show “Last Week Tonight,” urged viewers to refer to Donald J. Trump, then the front-runner for the Republican presidential nomination, as “Drumpf,” the family’s ancestral name. “If you are thinking of voting for Donald Trump, the charismatic guy promising to ‘Make America Great Again,’” Oliver told viewers, “stop and take a moment to imagine how you’d feel if you'd just met a guy named Donald Drumpf: a litigious serial liar with a string of broken business ventures and the support of a former Klan leader whom he can't decide whether or not to condemn.” Oliver created the hashtag #MakeDonaldDrumpfAgain; HBO created DonaldJDrumpf.com, which continues to sell “Drumpf” merchandise and offers a free Chrome extension, the Drumpfinator, that converts all instances of “Trump” with “Drumpf.” The gambit underscored the ludicrousness of this election year as well as the power of naming and name-calling. After all, the target of the “Drumpf” campaign had repeatedly invented cruel nicknames for his rivals: Lyin’ Ted, Little Marco, Crooked Hillary, Pocahontas.

Pokémon Go. Twenty years after the original release of Pokémon, a new mobile, location-based version of the game, Pokémon Go, was released in July and quickly became a global success. The game, which requires players to “catch” Pokémon by moving through real-world surroundings, also attracted criticism for causing accidents and encouraging privacy invasion. The Pokémon name comes from the English words pocket and monster that were transformed into a Japanese-sounding word through a process called wasei eigo.

Samsung. First, the company’s new Galaxy Note 7 smartphones developed an alarming habit of catching fire. Then its washing machines started exploding. Samsung eventually recalled 2.8 million washers and pulled the plug on the Galaxy Note 7. In short: a devastating year for a brand so closely associated with South Korea that many Koreans refer to their country as “The Republic of Samsung.” The Samsung name translates to “three stars” or “tri-star.”

Red Lobster. Employees of the Florida-based restaurant chain, founded in 1968, were probably as surprised as anyone when their company was name-checked by Beyoncé in “Formation,” posted on YouTube February 6 and performed the following day during the Super Bowl. (The line in question: “When he fuck me good I take his ass to Red Lobster [cause I slay].”) Red Lobster’s sales jumped 33 percent after the shout-out.

Brexit. In a June referendum, 52 percent of Britons voted to leave the European Union, a move portmanteau-ized as “Brexit.” The results had not been predicted by polls – a harbinger of the equally unrealistic polling in the U.S. presidential election, which led many Americans to assume a relatively easy victory for Hillary Clinton. Clinton’s opponent, who won the electoral-college vote (while losing the popular vote by 2.6 million), called himself “Mr. Brexit” and predicted that the U.S. election would be “Brexit-plus-plus-plus.” After the November 8 election, a California group organized a Yes California Independence Committee that called for a “Calexit” from the United States:

In our view, the United States of America represents so many things that conflict with Californian values, and our continued statehood means California will continue subsidizing the other states to our own detriment, and to the detriment of our children. ... In 2016, the United Kingdom voted to leave the international community with their “Brexit” vote. Our “Calexit” referendum is about California joining the international community.

(Disclaimer: I’m not sure Brexit belongs in this category, but I’m putting it here anyway.)

Chicago. The Cubs won baseball’s World Series for the first time in 108 years, breaking the Curse of the Billy Goat and giving fans the unfamiliar feeling of a superiority complex.

Aleppo. Syria’s largest city, which had a population of 2.5 million and whose Old City is a UNESCO World Heritage Site, has endured four years of combat in the country’s civil war, including incendiary bombing by Russian and Syrian forces. The crisis has been widely covered in the U.S. media, but word of it apparently hadn’t reached Libertarian presidential candidate Gary Johnson when he was interviewed on MSNBC in September. “What is Aleppo?” – or, possibly, “What is a lepo?” – he asked his interviewer.

Boaty McBoatface. The winner of an Internet poll in March to name a new British research vessel. (“The people of the Internet had spoken emphatically,” wrote Uri Friedman in The Atlantic, “and they’d spoken like a five-year-old.”) But this wasn’t just a British story: the name spawned imitators around the world. There was Tweety McThinskin, coined to describe Donald Trump; Horsey McHorseFace, an Australian racehorse; Parsey McParseface, the name of Google’s new language-parsing tool; and even Namey McNameface, which Google joked would be the name of its next Android version, slated to begin with the letter N. (It ended up being called Nougat.) 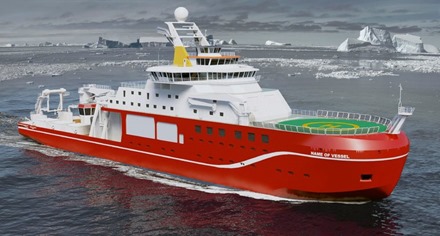 Ghost Ship. From the ridiculous to the tragic. On the night of December 2, a fire broke out during a party in an Oakland, California, warehouse that housed an artists’ collective. It took almost five hours for 52 firefighters to extinguish the blaze; 36 of the 50 people at the party died. The warehouse had no fire sprinklers or smoke detectors, and one second-floor exit route was a stairway made of wooden pallets that quickly burned. The fire was the deadliest in California since the 1906 earthquake and fire; it made national headlines. The building’s nickname seems heartbreakingly prescient: In sailing lore, a ghost ship is a ship with no living crew aboard, such as the fictional Flying Dutchman or the real Mary Celeste.