On language and words

The Word Detective: Searching for the Meaning of It All at the Oxford English Dictionary. Hired in 1976 as an editorial assistant (or “cub lexicographer,” as he puts it), John Simpson rose through the ranks at the OED to become its chief editor. His self-effacing book is part memoir, part word trove: bold-faced, sans-serif sections, set apart from the main text, offer in-depth excursions into the history of words as various as same, paraphernalia, and bugbear. There’s a poignant aspect to Simpson’s personal story: his younger daughter was born with a never-diagnosed mental disability that has left her incapable of language. (Disclaimer: I received a free review copy of The Word Detective from its publisher, Basic Books.)

Speaking American: How Y’all, Youse, and You Guys Talk: A Visual Guide. Josh Katz, now a graphics editor at the New York Times, began this project as an online dialect quiz in the fall of 2013. He drew on the Dictionary of American English (DARE), the Harvard Dialect Survey, and suggestions from family and friends, and eventually received 35,000 responses, which he turned into mesmerizing maps. Interspersed among the maps are sidebars on “how to pretend you’re from” various regions and states. Until I read the California sidebar, I hadn’t known that people outside my native state didn’t call freight trucks big rigs – although, to tell the truth, I’ve never heard anyone but a traffic reporter use that term. 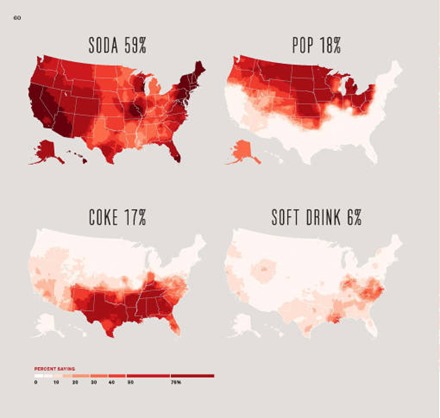 One Nation Under God: How Corporate America Invented Christian America. The idea of America as a “Christian” nation is a recent invention, as Kevin M. Kruse makes compellingly clear in his 2015 book. The movement began in opposition to FDR’s New Deal and came to fruition during the Eisenhower Administration, when “one nation under God” was inserted into the Pledge of Allegiance and the “traditions” of the National Prayer Breakfast and inaugural prayers were concocted. An essential read if you want to understand the origin of one of our national mythologies.

In the Darkroom. Susan Faludi has written brilliantly about men and feminism (Backlash), men and work (Stiffed), and misogyny and security (The Terror Dream) – all of which I recommend. Her latest book is a memoir, but it touches on all of her past themes. In 2004, Faludi’s 76-year-old Hungarian-born father, whom she had barely seen since her teens, announced that he had had sex-reassignment surgery and wanted to rekindle his relationship with her. In reuniting with Steven, now Stefánie, Faludi confronts questions of sexual, political, and religious identity. (I was startled to learn that Stefánie’s birth surname had been Friedman – changed to Faludi to appear less Jewish and more Hungarian.)

Lab Girl. Geobiologist Hope Jahren has written a memoir about her life in science that’s also a rapturous tribute to trees and their parts. It’s also a tribute to her long friendship with her unconventional lab partner, Bill. And it’s a scarily vivid account of her manias and depressions. Somehow, it all coheres, beautifully.

Magic and Loss: The Internet as Art. Virginia Heffernan learned programming as a child, earned a PhD in English literature, spent time as an editor for Yahoo News, and has written about technology and digital culture for the New York Times. In Magic and Loss, she brings a poetic-nerdy sensibility to subjects like earbuds, video games, and BlackBerry keyboards. I wrote about Heffernan’s use of “hyperlexia” back in September.

Spain in Our Hearts: Americans in the Spanish Civil War, 1936-1939. Adam Hochschild (To End All Wars, Bury the Chains) is a journalist turned historian, which means his books are deeply researched – often from primary sources like letters and diaries – and clearly, movingly written. He was able to interview some of the last survivors of the Abraham Lincoln Battalion – American volunteers in the Spanish conflict – and he also uncovers the role played by the American oil company Texaco in furthering the Spanish Fascist cause.

I’ve never picked up the Audible habit (or the Kindle habit, for that matter), but I always have an audiobook in my car. I check out audiobooks from the Oakland Public Library, and three cheers for that fine institution, which thoughtfully emails three-day notices when books are due.

Dark Money: The Hidden History of the Billionaires Behind the Rise of the Radical Right. Published in January, New Yorker writer Jane Mayer’s chronicle of the Kochs, the DeVoses, and other bankrollers of the Right is both meticulously researched and elegantly written. It’s been an invaluable aid to untangling the web of connections surrounding the incoming administration. I would have wished for a better reader for the audiobook, but the compelling subject matter makes up for her deficiencies.

Hold Still: A Memoir with Photographs. Wait a minute, you’re saying: the memoir by the great photographer Sally Mann … as an audiobook? Yep. Mann herself reads it, and she is a revelation: she has a rich, resonant voice and an actress’s sense of phrase and emphasis. The audiobook includes a CD with Mann’s photographs, but her words provided all the imagery I needed.

Life After Life and A God in Ruins. I’ve read both of these connected novels, by Kate Atkinson, in bound form, and listened to each a couple of times. They are masterly in their conception, brilliant in their use of language, and shattering in their emotional impact. And each book’s reader is perfectly matched to the story: Alex Jennings (an actor I’ve admired in theater and movies) for A God in Ruins and Fenella Woolgar, of whom I’d never heard but intend to seek out, for Life After Life.

Girls and Sex: Navigating the Complicated New Landscape. Another pleasant surprise: author Peggy Orenstein makes a terrific reader for her book about sexual myths and realities and how they affect girls in the middle school to college ages. Orenstein is an experienced journalist, and her patient research and interviews make this book vivid and often heartbreaking.

Purity. I didn’t read much fiction in 2016, but I did make it through all 25 hours of Jonathan Franzen’s latest novel. The audiobook employs three narrators, sequentially, to tell this contemporary twist on Great Expectations, with a little Wikileaks thrown in for good measure. (Other notable audio-novels, listened to on long drives: Emma and The Age of Innocence.)

Two disappointments on the audio front: I’d looked forward to On the Move, the memoir by the neurologist Oliver Sacks that was published shortly before his death in 2015. Sacks’s writing is as lively as ever, but the choice of an American reader ruined the listening experience. Sacks’s distinctive British voice, with its faint speech impediment and wry inflections, was unforgettable; he deserved a better narrator. (May I recommend Alex Jennings?) And All the Light We Cannot See may be as fabulous as everyone says, but its short, choppy chapters and staccato sentences make for unpleasant listening.

The Asshole’s Guide to Cooking, Volume 1. Is there anything my Strong Language comrade-in-swears James Harbeck can’t do? Probably not. His new cookbook – not for assholes, he clarifies, but by an asshole – originated on Twitter, and the step-by-tweeted-step format translates perfectly to the page. He’s a good photographer, too. I’m going to pass on all the mammal-based recipes (while enjoying their names, such as Pork with Orange Things and This Is Some Crazy Schnitzel), but I look forward to trying the Aruguletcetera Salad and OMFG Mashed Sweet Potatoes.

They May Not Mean to, But They Do. I’ve admired Cathleen Schine’s writing – nonfiction (in the New Yorker and elsewhere) and fiction (The New Yorkers, Love Letters) – for years. And we’ve followed each other on Twitter for some time now. This year I got to meet her when she came to Berkeley to read from her delightful new novel. They May Not Mean to… (the title is a line from Philip Larkin’s “This Be the Verse”) is about aging and loss and difficult family members, all handled with a light touch that comes across as effortless – a sign of true craft.

What I’m Going to Read Next

The Undoing Project, by Michael Lewis, about Amos Tversky and Daniel Kahnemann.

SPQR, by Mary Beard, a history of ancient Rome (I’m a couple of chapters in already).

Your suggestions are welcome, too! Nonfiction preferred, as you’ve probably surmised by now.

SPQR was a lot of fun--I don't have the qualifications to evaluate Mary Beard's scholarship but she must be a terrific undergraduate lecturer, the kind who gets raves on Rate My Professor but people in remote disciplines like Engineering or Molecular Biology. She devotes a certain amount of time to reminding the reader not to take "I, Claudius" for history--even quasi-history; I probably fell into this (gossip is always memorable) but I can live without the tale of Livia poisoning every fig on Augustus' tree. It's still a great series.