« Word of the week: Fake | Main | On the Visual Thesaurus: Fakes, lies, and post-truth politics »

Word of the week: Hotep

I discovered hotep (or Hotep) serendipitously: I was looking for Afro-Cuban responses to the death of Fidel Castro, and a Twitter trail led me to @audaciouskay. I didn’t find what I was looking for, but I did learn a new word.

And that's where some of the black vote for Trump came on. Hotepped right on to the polls. https://t.co/z25Zdk0IFr

The word reminded me of the names of ancient Egyptian deities and pharaohs, and a bit of research confirmed my hunch. Hotep is an Egyptian word that’s translated as “to be at peace.” The word is also found in some ancient Egyptian names, such as Hotepsekhemwy (“the two powers are at peace”), the first ruler of Egypt’s Second Dynasty (c. 2890 – c. 2606 BCE); and the four pharaohs named Amenhotep (“Amun is pleased”). Hotep was a character (voiced by Steve Martin) in the 1998 animated film The Prince of Egypt.

The Twitter usage, though, looked more like contemporary slang than classicism – and pejorative slang at that. So I checked out Urban Dictionary, where the oldest definition of hotep, by “Brother Enki,” is from January 2011 and reads:

“Peace” or “I come in Peace” it is a common greeting with people well versed in true world history.

That still didn’t fit “Hotepped right on to the polls.” Something had changed in the last five years.

That change is evident in the next-oldest Urban Dictionary definition, dated October 22, 2015:

One who thinks and talks enlightenment and has no idea what he or she is actually talking about. Found predominately [sic] in the African American culture. Hotep thinkers believe almost everything is a conspiracy against the black race while having no actual proof to back up said conspiracy.

In January 2016 “Aaaayall” submitted a definition in which the “…or she” was pointedly absent. According to this definition, hoteps (lower case) are:

Black men who are only concerned about matters of social justice when it comes to black men and have little or no regard for the health and well-being of other members of the black race unless those people can serve to uphold their misogynistic societal ideas.

Hoteps are bitter black men who are somewhat progressive though undereducated on issues of racial prejudice and use pro-black rhetoric to support ideas that are clearly not in the best interest of all black people.

The earliest full article I found about hotep is from The Visibility Project, which published “7 Ways to Identify a Member of Hotep Twitter,” by PhD student B. Alexandria Painia, in November 2014, not long after the publication – a platform for “the work of marginalized communities” – was launched. Without defining hotep, Painia provides some illustrations:

This specimen can usually be found championing for the rights of Black men while simultaneously throwing Black women, Black Trans persons, Black members of the LGBTQ community or anyone else who is not a Black male under the bus.

You enjoyed the film Dear White People except for the gay parts… “’cause [you] ain’t with that gay shit” and watching two men engage in a romantic interaction might get some of the gay on you.

A fuller explanation comes from The Root, an online magazine of African-American news and culture with a distinguished pedigree: It was founded in 2008 by Henry Louis Gates Jr., the Harvard scholar, and Donald E. Graham, son of Washington Post publisher Katherine Graham. (It’s currently owned by Univision.) A March 5, 2016, article by Damon Young, “Hotep, Explained,” has the subtitle: “Here’s how to know that signs that you might be a Hotep.”

(So: It’s a noun as well as a verb. Maybe a proper noun, to judge from the capital H.)

“Hotep,” writes Young, can be a greeting: “It’s basically the Egyptian ‘What’s good?’” He goes on:

Over the past several decades, the word has also been utilized quite frequently by black Americans who happen to be more Afrocentric. Let me put it this way: If you happen to attend a Juneteenth festival this year and collect business cards from vendors there, at least 17 percent of them will have “Hotep” written somewhere on them.

(If you don’t know what Juneteenth is, read this.)

Over the last decade, Young writes,

the working definition of “Hotep” has morphed into an all-encompassing term describing a person who’s either a clueless parody of Afrocentricity—think “Preach” from Don’t Be a Menace to South Central While Drinking Your Juice in the Hood—or someone who’s loudly, conspicuously and obnoxiously pro-black but anti-progress.

As commenter Lionel Lionel observed: “We use ‘hotep’ because ‘hipster’ was already taken and ‘closed-minded chauvinist’ is too long to say...”

And hotep can be an adjective, an adverb, and a verb as well as a noun. Young gives this example sentence: “I didn’t realize he was a Hotep until I friended him on Facebook and he kept sharing Hotep memes on my timeline.” 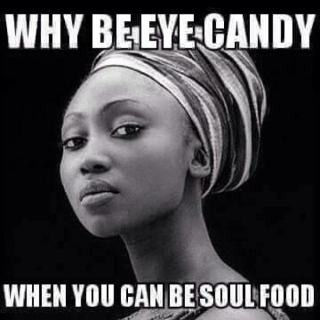 As that image might suggest, there’s an implication of sexism and mansplaining in the derogatory use of Hotep. In August 2016, Danielle DeCourcey wrote in Attn. that “the Hotep movement” (more about that in a minute) “is often criticized as misogynistic and homophobic.” She included this meme in the article: 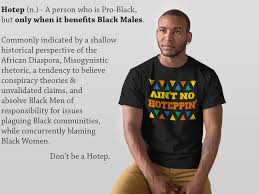 Then there are the hotep reclaimers – proud members of the hotep movement – such as the authors and audience at Hotep Nation. This is where, in August 2016, a writer identified as T Cat defended hotep this way:

To me, being Hotep means Self-Accountability, not a being victim, not having an oppressed mindset, healthy living, black economics, financial responsibility, and maintaining the black nuclear family. These are key elements that are the core of the Hotep movement.

For reference, other articles on HotepNation include “Feminism is patriarchy masquerading as women’s liberation” (Excerpt: “Maybe women need to stop having children out of wedlock, especially with irresponsible men”); “All Lives Matter; here’s why” (“Black lives matter is a front organization for the globalists”); and “Black on black crime: myth or not?” (“The police are constantly in our community in the 1st place is because we keep committing this violence”).

I haven’t found hotep in any standard U.S. dictionary, online or off – unlike woke (“socially aware”) which is in Merriam-Webster and which, as #staywoke, was a contender for Most Notable New Hashtag in the American Dialect Society’s 2015 words of the year vote. But it’s definitely in the mainstream of African-American slang, and even in mainstream African-American media. (Ebony, for example.) I’m casting a vote for hotep as the 2016 word most likely to succeed. For supporting evidence, I give you CRS at the Black Girl Nerds blog:

Hotep has the word “ho” right in it and it’s a funny and African, and no one knows what it means. So, it basically fits all the criteria for making it a good modern day slur.

Posted at 06:20 AM in Politics, Slang, Word of the Week | Permalink

I came for naming guidelines and stayed for this article 😂😂

Lj: Hah! And thanks! Stick around -- you never know what you might find on Fritinancy.

This is a really good one! I had never heard the word, and I confess I was guilty of thinking all black people automatically held the same political beliefs. I know, I know.

You left out the one reference that came to me when I saw the word. It's the title of a movie in which Elvis and JFK are both still alive and in a nursing home, where they have to fight against an evil Egyptian power of some sort. And JFK has been dyed black. Hey. I didn't write it.