Full disclosure up front: I’m a registered Democrat, and I voted for Hillary Clinton in the California primary and the general election. I contributed a modest amount of money to her campaign. I am in no way an expert in presidential politics, just a reasonably well-informed observer and participant in the democratic process (such as it is under late-stage capitalism).

Here’s what I do know a few things about: branding and marketing. And from the beginning, even though I liked Clinton as a candidate and wanted her to prevail, I saw a lot that troubled me about how her campaign handled marketing, positioning, and advertising. I kept seeing what seemed like rookie mistakes, despite Clinton’s decades of experience and despite the glossy surface of the marketing content.

And so, even though the election was eight days ago and this may seem like beating a dead horse, I’m going to do a little flogging. With any luck, I may prevent some of you from making similar errors in your own marketing efforts – political, personal, or corporate.

Introduced in April 2015, the campaign logo was nothing if not professional. It was designed by Pentagram’s Michael Bierut, a Very Big Name in Design, and it checked off a lot of design-school boxes: minimal, sleek, versatile, a tiny bit clever. (Blue and red – she’s a unifier! Arrow neatly nested atop H – how efficient!) 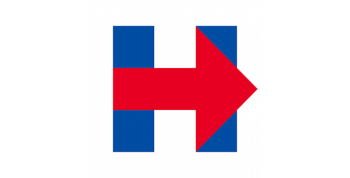 Despite its pedigree, the logo was attacked by other designers. And even civilians found it puzzling: It reminded them of hospital signage, and what did it mean that the arrow pointed right – was she signaling her conservatism?

When the Trump-Pence campaign introduced its own logo, with that thrusting-piston “T” plunging into the “P,” it was mocked, too. (And quickly changed.) But it turned out that its crass unloveliness, its I-made-it-on-my-laptop crudity, was 100 percent on-message and on-brand, the logo equivalent of the décor in Trump’s penthouse. Trump fans embraced it, just as they’d later embrace the “deplorables” insult. Professionalism and control were passé; ugliness and bluntness brought out the crowds to the rallies.

In short, the Clinton logo was an elegant, tone-deaf “solution” rather than an effective marketing tool. Design can indeed solve many problems, but to succeed it must engage with an audience.

There was a formal slogan, “Stronger Together,” and an informal one, “I’m with Her.” From a purely academic perspective, both were well executed. Two eight-letter words in “Stronger Together” made for perfect balance, the -er endings had a nice symmetry, and look – there’s a her embedded in together. “I’m with Her” made it personal.

Anyway, that must have been the intention. 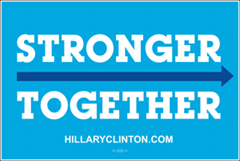 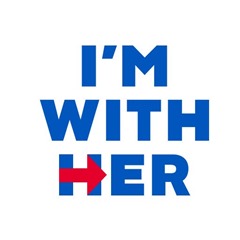 But look what’s missing. There’s no noun or verb in “Stronger Together” unless you count the invisible, implicit “We are…” There’s no call to action. There’s no compelling image. (Again with the right-pointing arrow!) “I’m with Her” was worn proudly by the already converted, but to fence-sitters it must have looked like a blatant (and even exclusionary) appeal to gender solidarity. It turned out there were a lot of men (and women, too) who liked Clinton’s policies and experience but were uncomfortable making it all about that damned glass ceiling.

A third slogan surfaced after Trump became the nominee: “Love Trumps Hate.” For true believers who knew that trump is sometimes a verb (and knew what it meant), it resonated. But smart marketers know it’s folly to incorporate your rival’s brand into your own branding: it reminds your audience that they have a choice. (Do Coke ads mention Pepsi?) Some of Clinton’s opponents inserted a first-person pronoun into the slogan: “I Love Trump’s Hate!” sounded just dandy to all those deplorables whom Clinton had (privately, she thought) dissed.

As for “trumped-up trickle-down economics” – another reminder of the opponent’s name, never a smart tactic – that was was a tongue-twister never destined to catch on.

Contrast those slogans with Trump’s slogan, “Make America Great Again.” It wasn’t original – plagiarism was another depressing theme in this election – but it was memorable and, like the logo, brutally effective. 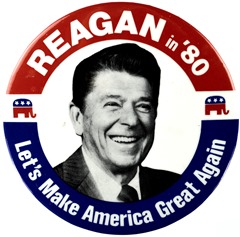 Say what you will about the messenger, the message had force. (Abbreviated, as it often was, to MAGA, it always reminded me of the Israeli self-defense system Krav Maga, in which maga, accented on the second syllable, means “contact.”) It was an imperative and a call to action; the implicit word was you, always the most powerful pronoun in marketing. And it told its audience what they wanted to hear: that we’d be going back in time to some mythical Golden Age of (choose your favorite) white majorities, school prayer, Rust Belt factories, consequence-free racial discrimination, or pussy-grabbing. If there had been a symbolic arrow, it would have pointed backward.

Summary: A bland, focus-grouped slogan doesn’t stand a chance against a promise of greatness and a rousing invocation of lost glory.

Trump didn’t do much paid advertising; he didn’t need to, because the media (which he constantly professed to despise) slavishly covered his progress from clownish outsider to sure thing. The few ads he produced were grim and negative. Clinton aired three times as many ads as her opponent, but almost none in the states that turned out to matter the most: Wisconsin, Michigan, and Virginia. This was more preaching to the choir, or taking votes for granted. You simply can’t follow that strategy if you want to attract new votes (or new customers, for that matter).

One of Clinton’s most talked-about ads, “Role Models,” used Trump’s own speeches. The intent here was to prove that Trump was too extreme, too vile, too unfit for the presidency – and certainly no role model for the sad-looking children in the ad. That approach was crafted to tug at the heartstrings of sympathetic listeners. But suppose you were looking to your candidate not for empathy but for forcefulness. Then you’d hear Trump’s words not as appalling but as bold and, well, masculine. In any event, you’d hear Trump. You might not hear Clinton at all.

To counter the incessant drumbeat of emails/corruption/Benghazi – mostly blown wildly out of proportion by right-wing “news” sources – Clinton played to her strengths. She has, in her own words, been “fighting for women, children, and families” for her entire career. To most of us, that sounds admirable. But suppose you’re a single man? Or a divorced man with a grudge against his ex? What was Clinton offering you?

I confess I hadn’t heard this subtext until I read a tweet by Heidi Raatz, a librarian in Minnesota, who overheard two men in their 20s or 30s discussing the election results. One had voted for Clinton, the other for a third-party candidate; both had been supporters of Sen. Bernie Sanders in the primary. “The message they heard from Clinton was ‘women and children’; they did not hear *their* issues addressed in her campaign. Period.”

Trump, of course, was (and remains) an equal-opportunity fearmonger: women were being raped (by Mexicans), men were losing their jobs (to China), everyone was going to have their guns confiscated. His was a big, dark, scary tent, big enough for everyone – everyone who thrills to that sort of thing, that is – to find a space. And that turned out to be just enough people.

The Clinton campaign was hobbled by insularity, tone-deafness, and inattention to audiences other than the already committed. This approach can work when you’re going back to former supporters – or customers, if you’re a company instead of a politician – for repeat business. As a strategy for expanding your base and appealing to the undecided, it’s doomed.

I welcome your comments, but please keep them on topic: advertising and marketing, not ideology. For an excellent perspective on what Madison Avenue may or may not have learned from the campaign, read Stuart Elliott in Media Village. He’s the former ad critic for the New York Times, and his writing is always smart and perceptive.

UPDATE: For a far more detailed and erudite analysis, see this post by linguist and cognitive scientist George Lakoff, author of Don't Think of an Elephant!

For more politics from me (in less guarded tones), see my Twitter.

Posted at 06:15 AM in Advertising, Design, Politics, Slogans and Taglines | Permalink

Because lawn signs were being stolen, I hung a large arrow on my front porch, between two pillars. It was a fairly close reproduction. Yet no one, not even Clinton supporters, recognized it as Hillary's logo. It just didn't register.

Might I suggest another key problem with using "I'M WITH HER"?

It sounds too much like those silly "I'M WITH STUPID" T-Shirts.

I'm surprised you hadn't noticed a few other issues with the logo. The arrow is reminiscent of FedEx's almost hidden logo that subtly almost unconsciously expresses forward movement: ideal for a logistics company, not ideal for a political movement. With the H-Forward logo, one gets the clunky sense that we're all just goods being transported through services from point a to point b. Emphasis is on the temporal and mechanical - a bit devoid of humanity. The H - Forward is problematic at the unconscious level for many Americans still smarting from 9-11. The icon could be seen and felt as an airplane flying through the twin towers. There is something pushed and aggressive about the inspiration behind the concept. The arrow symbol can be misinterpreted in many ways. On the surface it appears to demonstrate direction (rightward as you pointed out). However, the arrow I'm its most primitive form is a weapon, a vector for dispatching enemies. One also cannot discount the phallic and masculine symbolism of the arrow - if one is inclined to Freudian post-feminist interpretations of male symbolism. Was it a way to express unconsciously her masculine, muscular bona fides being the first woman to represent a major party in U.S. Election history? The conscious and unconscious have too many choices and interpretations with this branding. Without making too sweeping of a generalization it seems that a gay man dressed her up as a man with that logo squelching her femininity. She surrounded herself with many young millenials who had energy, drive and some accomplishments but probably lacked the experience to understand which way the wind was blowing. It was obvious she was trying to capture the same branding magic as Obama's iconic logo. To keen observers this represented a continuation of Obama's policies in the form of brand identity. The electorate was looking for something different - a break from the past. Something clear, honest, direct and not subject to interpretation. In this way Trump's brand worked better. Of course, he didn't have to do much because he was already an established brand. Hillary had to try to re-position herself in the brandscape.