« Name in the news: Wawa | Main | Word of the week: Derangement syndrome »

Acronyms on the menu

Two signs in two restaurants, both in my general neighborhood in Oakland.

1. Choriz-O-M-G at Chipotle on Lakeshore Avenue. 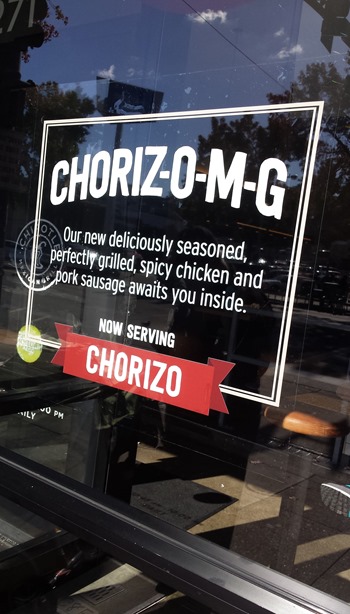 Chipotle is also running a “BOGO” promotion – Buy One, Get One –for active, reserve, and retired members of the armed services.

For other commercial uses of OMG, see my 2012 post. 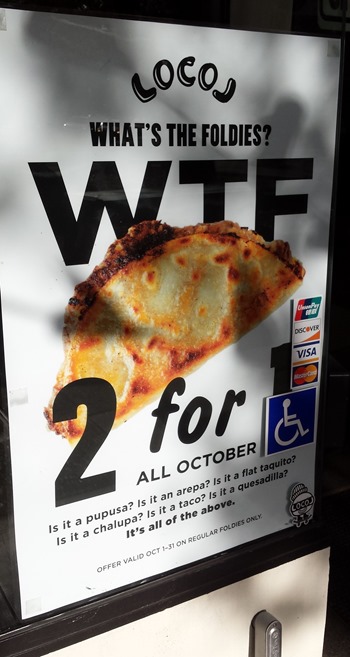 I’m a little puzzled by the grammar here. Foldie appears to be singular, so WTF is “the foldies”?

For other not-quite-sweary WTFs, see my post for Strong Language.

LocoL is a new mini-chain of fast-food restaurants with a high-minded purpose and an impressive pedigree. It was started in January by star chefs Roy Choi (Kogi BBQ Trucks) and Daniel Patterson (Coi); its first outpost was in the Watts neighborhood of Los Angeles, not known for a wide array of healthful eating options. The Oakland store, which opened in May, is in Uptown, which is quickly gentrifying but still sees a lot of foot traffic from normal, cash-strapped working people. The food at LocoL is inexpensive – those Foldies are $3, and “burgs” (there’s a vegetarian option) are $5, a price that includes “awesome sauce” – and the menu displays some wit: one grain-based salad is called Bulgar Language. Staff is hired from the surrounding neighborhoods.

LocoL has a mission statement:

We fundamentally believe that wholesomeness, deliciousness and affordability don't have to be mutually exclusive concepts in fast food. We believe that fast food restaurants can truly empower the communities they currently underserve.

We believe that the giant corporations that feed most of America have degraded our communities by maximizing profits over decades.

We believe that chefs should feed America, and not suits.

The LocoL name appears to be a blend of loco (crazy) and local. Here’s Roy Choi quoted in the Los Angeles Times about the new enterprise:

"When Daniel called me, he said: Roy, I have this crazy idea," said Choi. "I just knew. We both knew. We're in this whether we want to be or not."

How crazy is LocoL? Well, they’re selling a comic book.

Posted at 06:30 AM in Acronyms, Oakland, Restaurants, Slang | Permalink