« On the Visual Thesaurus: A column about nothing | Main | Word of the week: Nasty »

Now, let me say right here that I love dictionaries and I admire lexicographers. (In fact, I’m reading a lexicographer’s memoir right now: The Word Detective, by the former chief editor of the Oxford English Dictionary, John Simpson.) But I’ve also written ad copy – and speeches – and I know a cliché when I see one.

Does anyone who reads the Salesforce Tower ad not already know the definition and pronunciation of “landmark”? Is anyone’s estimation of Salesforce enhanced by the knowledge that “cairn” can be a synonym for “landmark”? On the contrary, anyone who knows that a cairn is a modest stack of rocks would probably be puzzled by the comparison to a 1,070-foot-tall glass-and-steel skyscraper. 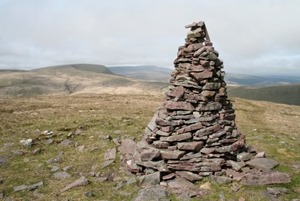 Here’s something I’ve noticed about dictionary-definition ads: they never tackle tough words like jejune or hegemony. The words are always common ones like ideas or taste or landmark – words whose meanings and pronunciations we already know. It’s as though the copywriters are saying to us: “Let us show you a word you’ve known since you were a kid. Now let us explain it to you in the most literal way possible, so that we reveal nothing new about it – or ourselves.”

Or maybe they’re saying: “We laid off all our copywriters, and this is the best the design department could come up with.”

When I wrote about this subject for the Visual Thesaurus in 2013, I called it “branding by definition.” I quoted Kory Stamper, a lexicographer at Merriam-Webster, who said the problem with this approach is that “the mystique of the dictionary ends up butting up against the reality of the dictionary. The mystique says that dictionary definitions convey authority, that they get you to think about what something really is. … But the reality is that most people expect dictionary definitions to be boring, which is the last thing that any advertiser wants their ad to be.”

And yet the borrowed-from-a-dictionary ads keep coming. You might say it’s the very definition of a missed opportunity.

P.S. Here’s the bottom half of the Salesforce Tower ad. Nice photo. 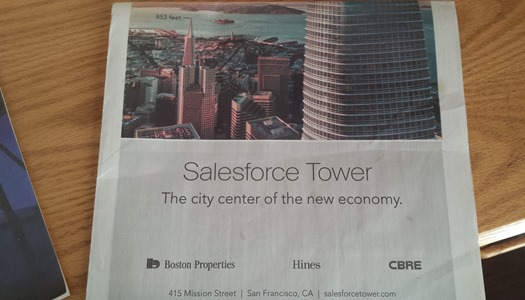 I'm not sure if that's better or worse than the ones that use fake definitions, often getting the part of speech wrong.