« October linkfest | Main | On the Visual Thesaurus: A column about nothing »

Word of the week: Risotto

Risotto: “An Italian dish of rice cooked in stock with ingredients such as vegetables and meat or seafood” (OED). The dish is associated with northern Italy and particularly Milan (risotto milanese). From Italian riso (rice) and the diminutive suffix -otto. ItalyHeritage.com offers alternate etymologies: “Some say it came from an exclamation of Frederick Barbarossa, who praised a ‘Risum optimum’; others maintain it derived from a term used by the Insubres, the Celts that inhabited Lombardy, ‘risott.’”

Risotto was in the news last week because of a tidbit in Democratic National Committee chair John Podesta’s emails, which were hacked and released by WikiLeaks. Business Insider’s Allan Smith tweeted the revelation:

(Also revealed: Like many people, Podesta has trouble with possessive its.)

To add some further context to this story, I have eaten @johnpodesta’s risotto and can confirm it is tasty. https://t.co/G2jiYChgmS 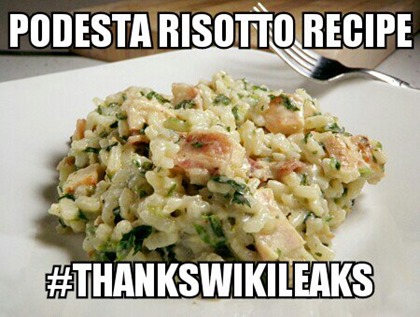 (Thanks and apologies to whoever I swiped this image from.)

Rice was introduced to Spain and Italy by Arab traders during the Middle Ages; it was cultivated around Naples in the 14th century and eventually found a welcome home in the marshy fields of the Po Valley. Risotto recipes began being published in the 1500s, but risotto as a name for the creation did not appear until the late 18th or early 19th centuries (accounts differ). It took a few decades for term to cross the Atlantic. Risotto is also an Italian surname, which makes database searches a little tricky, but the earliest citations I found in the New York Times are from 1885. One of them is in a May 24, 1885, article headlined “The Restaurant System. Choice Cuisine at Reasonable Figures. How Foreign Fashions Are Acclimatized in New York – Popular Places and Their Patrons.”

The recipe site Epicurious weighed in – “The Clinton campaign: wrong on apostrophes, right on risotto” – and offered several of its own recipes. Food and Wine also commented, calling Podesta’s “the canonical recipe.”

More Podesta-risotto-WikiLeaks tweets (including a humorless retort from the Assange cadre) here.

Posted at 06:30 AM in Food and Drink, Italian, Politics, Word of the Week | Permalink