« You could look it up | Main | Superlativest » 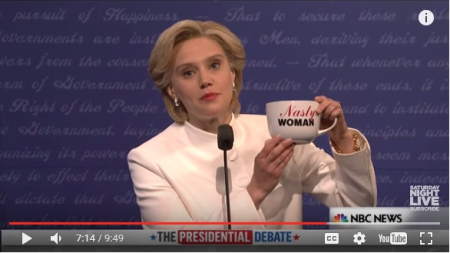 Megan Garber noted the response in an article on The Atlantic’s website:

After Donald Trump referred to Hillary Clinton, during Wednesday’s final presidential debate, as “a nasty woman,” many of Clinton’s fellow ladies took it upon themselves to make an announcement: They were nasty, too. Just as nasty—maybe even more nasty—than the woman Trump had attempted to denigrate, via a weaponized mutter, before a live audience of millions of people.

Soon, the hashtags #nastywomen and #IAmANastyWoman trended on Twitter. The website nastywomengetshitdone.com got passed around, mostly by people delighted by the fact that the URL, via some hasty behind-the-scenes maneuvering, now leads to Hillary Clinton’s campaign website. The Huffington Post asked its readers, with only a trace of irony, “Are you a nasty woman? Let us know.”

Trump’s use of nasty, Garber writes, “wasn’t just an all-purpose insult, the negative version of ‘tremendous’ or ‘very great’ or ‘yuge.’ It was highly gendered—so much so that ‘nasty woman’ read, coming from Trump, as redundant.” She dug into the word’s combined connotations “of physical dirtiness with filth of a more moral strain”:

Hamlet, via Shakespeare, used the word to combine sex with that infamously dirty animal, the pig: “Nay, but to live/ In the rank sweat of an enseamèd bed,/ Stewed in corruption, honeying and making love/ Over the nasty sty.” Since the 1630s, “nasty” has also been used to describe bad weather, which affects both one’s physical being and one’s psychic outlook. Since the early 1700s, it’s been used to describe generally unpleasant things. And, as an insult to women, in particular, “it dates back to colonial times,” Caroline Light, a gender studies professor at Harvard University, told the Washington Post. “A ‘nasty’ woman is one who refuses to remain in her proper place, as defined by men. One who challenges male authority.”

Nasty has appeared in other popular-culture contexts. “Nasty weather” is usually cold and damp; a “nasty cold” tends to linger.

Nasty Canasta was a Looney Tunes character in the 1950s. 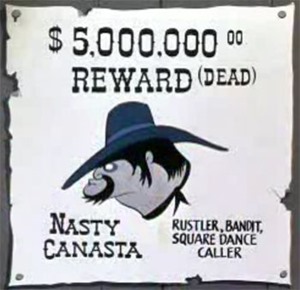 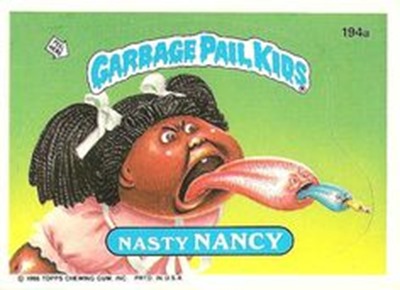 Madeline Berg wrote in Forbes that Spotify streams of Jackson’s songs increased 250 percent after the debate. And, she says, “T-shirts, tote bags, mugs and even a perfume have sprung up for sale on the Internet (including some products for men) that spin Trump’s slam to celebrate what they think Clinton exemplifies: female ambition, intelligence, power and action. “ 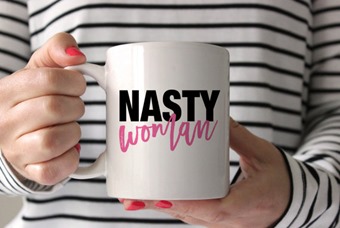 To all the "nasty women" out there—WE SALUTE YOU. Get your free #NastyWoman sticker today to receive before 11/8: https://t.co/MnkNuJ6eww

The 10-year-old Los Angeles-based retailer Nasty Gal, which started in 2006 as an eBay business and was doing $100 million in business by 2014, quickly altered its logo. 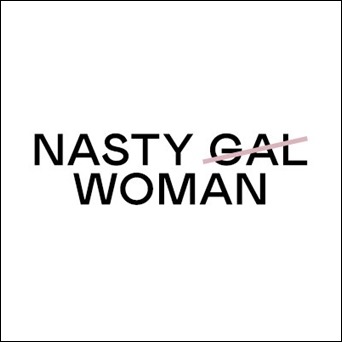 Nasty Gal was named in honor of Betty Davis, Miles Davis’s widow, whom the site called “the patron saint of badass women.” 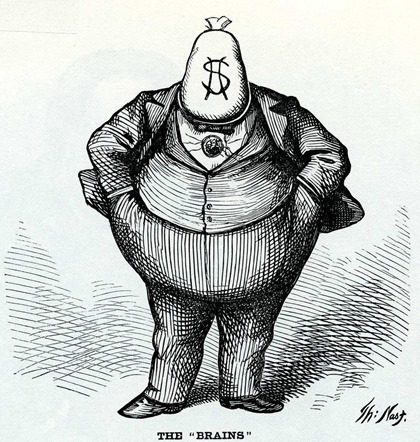 Posted at 06:30 AM in Etymology, Politics, Women, Word of the Week | Permalink