Word of the week: Lewd

Lewd was headline writers’ go-to adjective in coverage of a leaked 2005 audiotape in which Donald Trump boasts to Billy Bush*, the host of TV’s Access Hollywood, of, among other things, being able to “do anything” to women – including “grab them by the pussy” – because he’s “a star.” Judging from online dictionary lookups, it’s a word many people weren’t familiar with.

Until the news broke on Friday, I’d been planning to feature a different word of the week. But I was beginning to have doubts, so I decided to have a little fun. I conducted a two-hour Twitter poll; 67 people weighed in. 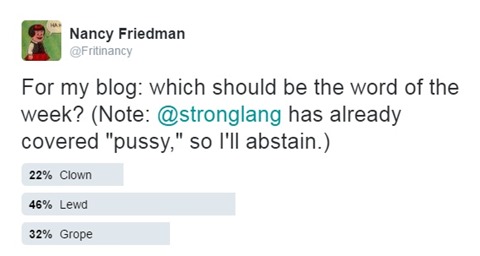 The people have spoken.

And so have the media. Lewd appeared 16 times within 24 hours, over October 7 and 8, in the New York Times. Other media outlets relied on it as well. 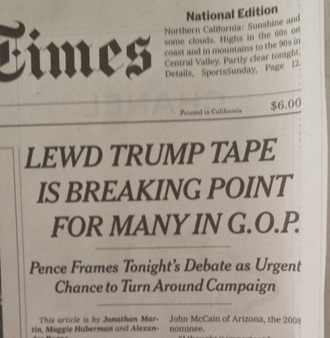 Lewd has the virtue of being compact enough to fit efficiently in a print headline – other descriptors included “vulgar,” “graphic,” and  “coarse” – although many people pointed out that it falls short on precision. Vice President Biden was one of them.

The words are demeaning. Such behavior is an abuse of power. It’s not lewd. It’s sexual assault. –Joe

In its entry for lewd, the OED wrings its institutional hands and says the word has a “difficult” etymology. Its Old English ancestor, lǽwede or lǽwde, meant “not clerical” or “lay” (adjective). Its many obsolete usages include “lewd-frere” (a lay monk or friar), “lewd tavern” (common, low in status), and “make the lewd [illiterate] well learned.” It also meant “wicked,” as in the OED’s example from 1709: “the lewd boy when he had set his mother's house on fire because she had corrected him.” It’s from this meaning that the surviving sense of lewd and “sexual, unchaste” derives; this sense has coexisted with the others since Chaucer’s time (the late 14th century). For more on lewd’s history, see John Kelly’s very interesting post on his etymology blog, Mashed Radish.

Lewd has a long history as half of a legal doublet, “lewd and lascivious,” in which the two words are near synonyms. English has many such doublets – “aid and abet,” “law and order” (a favorite mantra of the current Republican presidential nominee, and of many nominees before him), “null and void,” “terms and conditions.” Most of the pairs consist of one word with Anglo-Saxon roots (e.g., lewd) and another from Latin or Norman French (lascivious), reflecting the dual heritage of the English language and legal system.

Some of us learned lewd from Tom Lehrer, the musical satirist and mathematician whose song “Smut” (video) parodied Roth v. United States, the 1957 U.S. Supreme Court obscenity case that gave us the expression “redeeming social importance”:

All books can be indecent books
Though recent books are bolder,
For filth (I’m glad to say) is in
The mind of the beholder.
When correctly viewed,
Everything is lewd.
(I could tell you things about Peter Pan,
And the Wizard of Oz, there’s a dirty old man!)

If “That Was the Week That Was” – the satirical TV show on which Tom Lehrer first performed “Smut,” in 1965 – were still on the air, it would have a plenitude of words of the week to feature today. Here are the write-in votes in my Twitter poll.

@CopyCurmudgeon @Fritinancy I submit "sanctimony" as a dark horse.

@Fritinancy You forgot "beyond deplorable."

Q. Pheevr made a literary case for “grope.”

@Fritinancy ‘Lewd’ has an interesting history, but I vote for ‘grope,’ especially if you can work in lines 235–248 of “The Waste Land.”

And Ed Timberlake nominated the candy brand that Trump name-dropped on the tape.

@Fritinancy @stronglang "It's not just a mint, it's a Tic Tac"

I wrote about deplorables last month. (Other political posts here.) And I’m writing this post a few hours before the second presidential debate. Who knows what lexical surprises it will bring?

Posted at 07:21 AM in Etymology, Media, Politics, Word of the Week | Permalink

Does anyone else remember the old slogan "Put a Tic Tac in your mouth and get a bang out of life!" ?