Spotted on Telegraph Avenue in Oakland: a sign plugging the Jack in the Box Buttery Jack burger. 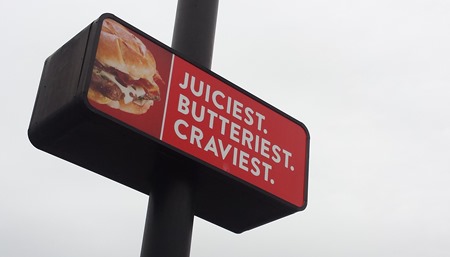 Sticklers will tell you that of those three adjectives, only juiciest is legit. I’m more concerned about the logical fallacy. Juicy and buttery (and their superlative forms, legit or not) describe the burger itself. But who or what is doing the craving?

.@Fritinancy @JackBox So, the burger is juicy and buttery but somehow is also animate such that it itself has cravings and is thus "cravy"?

Also defying logic: the nutritional value of this sandwich. It contains 820 calories, 470 of them from fat. Its 1150 milligrams of sodium constitute 48 percent of the recommended daily allowance. (Hold the fries!)

Jack in the Box is also proudly serving – and coining – brunchfast, which would seem to require another superlative: brunchfastest.