The concept for the device grew out of a personal misfortune: After RippleInfo founder and CEO Yang Liu’s home was burglarized, he experimented with existing home-security devices and was frustrated by their uneven performance or by their high fees for monthly maintenance or video storage. So Liu, an electrical engineer with a PhD from Michigan State University, developed his own device: a stylish home accessory that functions as a highly effective monitor of what Liu called “home health.”

The product exceeded his expectations, but his attempts at naming it were less successful. The parent company’s name, RippleInfo, wasn’t appropriate, said Liu: it was “too soft.” Other internally developed names had been rejected because they were too “hard” (e.g., names built on “warrior” or “Spartan”). Still others had failed because of trademark conflicts. Liu’s first language is Chinese, and although he speaks and writes English very well, he acknowledged that the naming process was challenging.

That’s where I came in.

I began the naming process with a phone conversation with Liu, who was 15 time zones away in RippleInfo’s Suzhou, China, headquarters. (The company now has a Silicon Valley office as well.) I studied diagrams and photographs of product prototypes, noting its elegant, angled-hourglass design and its multiple sensors: a high-definition camera, an audio recorder, a temperature and humidity sensor, and a passive infrared (PIR) motion detector. The device stores the information within its aluminum body on a 128Gb micro SD card, with API to DropBox and Google Drive. 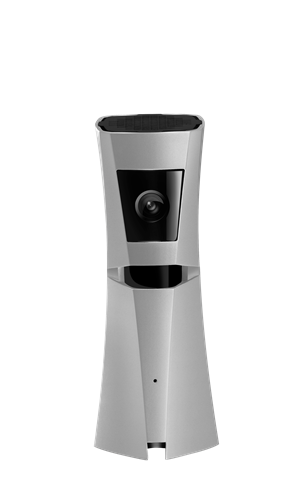 Next, I drafted a naming brief that outlined the product concept, the market (China and the U.S.), the brand personality (stylish, helpful, reliable, independent, intelligent, alert), the naming objectives (peace of mind, protection, seeing the future, a friendly companion), and the naming criteria (short and simple, possessing inherent meaning, available in trademark Class 09).

I knew at the outset that one criterion would be a particular challenge: the name had to be readily adaptable into an “elegant-sounding” Chinese name. (The example Liu gave me: The Chinese name of Uber, the ride-hailing service, is “YouBu,” which sounds similar and means “great step forward.”) I don’t speak Chinese, so I’m grateful that Liu was a kind and generous sounding board.

Despite my inability to speak, read, or write Chinese, I do know a few things about the language and culture. I know, for example, that R and L sounds can be difficult for a native Chinese speaker. On the other hand, “RippleInfo” has an R and and an L, and Liu was happy with that name. So … maybe LARA – a human name that suggests the Roman lar, a protective household deity – would be a good fit? Nope: Liu said it was too hard to pronounce.

I also know that numerology plays an important role in naming throughout Asia. In fact, I’d written a blog post about the prevalence of the number eight – the Chinese word for which resembles the word meaning “fortune” – in brand and location names in the San Francisco Bay Area, which has sizable Asian and Asian-American populations.

What I hadn’t known was how rigid Chinese trademark law is. In the U.S., for example, two names can coexist in Class 09, which comprises electronic devices, scientific instruments, and software, as long as there’s little probability that customers will be confused. In China, if there’s a UNIQUE online dating service, there can’t be a UNIQUE telescope company. Period. This made my task, shall we say, extra-interesting. (Hat tip to U.S. trademark lawyer Jessica Stone Levy for guiding me over the shoals.)

Through two rounds of creative work, one name kept surfacing as a strong candidate. SENS8 – pronounced sensate – highlights the device’s multiple sensors while incorporating the symbolically powerful eight. The unusual spelling matches the futuristic look of the device. (And yes, I was aware of the current TV series Sense8. I did not expect it to pose a conflict.)

Liu found the name compelling, too – so much so that he decided to use it unchanged in China as well as in the U.S.

The SENS8 security device is now available for early-bird orders through an IndieGoGo campaign. (Note: I did not write the copy or the script.)

I could actually see myself using SENS8; it certainly seems more intuitive than the cumbersome security system I use now. And the price does not seem daunting.