The French automaker Citroën, founded in 1919 by André-Gustave Citroën, has been absent from North America since 1974, when the U.S. Highway and Traffic Safety Administration denied the company an exemption to its bumper-impact standard. Since 1976, it’s been part of the PSA Peugeot Citroën Group; its CEO is a British woman, Linda Jackson. (That last fact puts Citroën in the very small club of automotive companies headed by women. Mary Barra, who has been CEO of General Motors since January 2014, is the only other member of that select group I can think of.)

But Citroën thrives in 57 other countries, including China. The C4 Cactus, a compact SUV, has been manufactured in Spain since 2014 and was named Car of the Year in Spain and Denmark in 2015. (The C in C4 stands for “compact.” UPDATE: See comment from Anders, below.) And although the car can’t be bought in the U.S., a special-edition model was developed in partnership with Rip Curl, a surfing-apparel manufacturer based in Santa Cruz, California.

The car’s looks are as quirky as its name. The raised black panels on the doors are something Citroën calls Airbumps (they come in three other colors as well); they’re meant to protect the vehicle from shopping carts in parking lots. So much for the rugged off-road fantasy.

The bumps may explain the name … to a point. Here’s how Which Car, an Australian review site, explained it in an article titled “Citroen C4 Cactus: 7 Things You Didn’t Know”:

6. Citroen gave it the name Cactus because a cactus does not need much water, like this car doesn’t need much fuel. Citroen also says the AirBumps on the side protect it, just like thorns protect a cactus. Cheesy? Maybe. But cars shouldn’t have to be serious all the time.

But there’s more to the story, as Matt Campbell wrote in Car Advice, another Australian review site:

Cactus: most of the world knows the word as referring to a spiky plant renowned for its hardy nature; but in Australia, where slang is the dog’s bollocks, it means broken, dead or not functioning.

This was news to me, but Lauren Gawne, an Australian linguist who tweets as @superlinguo, filled me in. In Aussie slang, she said, cactus is always an adjective, as in “That car’s cactus!” For a fuller explanation, she pointed me to the Australian National Dictionary Center, aka @ozworders. Here’s the AND’s entry:

Not just broken, in other words, but royally fucked up.

This isn’t the first out-of-the-ordinary name Citroën has bestowed on a car model. The DS, manufactured from 1955 to 1975, had a punning name: in French, it’s pronounced “Déesse,” which means “goddess.” (When the model was relaunched in 2009, the company claimed it stood for “Distinctive Series” or “Different Spirit.”) Citroën has also made cars named Picasso, Jumpy, and Nemo.

As it happens, when I learned of the Cactus I had just watched the season premiere of one of my favorite American TV shows. 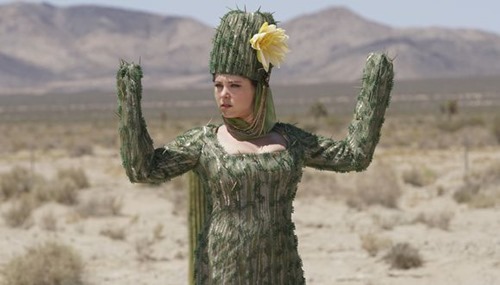 Rachel Bloom as a sexy cactus (with a bloom) in “Crazy Ex-Girlfriend,” Season 2, Episode 1.

I'm not sure why it's happening, but the 'Citroën' in this post's title is rendered as 'Citron' in the Recent Posts and elsewhere.

As an Australian, I immediately noticed the problem of the Cactus name for an Australian market, but I didn't know that the word only has that meaning in Australia.

Michael: I futzed with the post title, and the ë should be showing up now. (But not in the URL, which doesn't recognize it.)

No, the C in Citroën C4 does not stand for "compact". It's short for Citroën. All current models have a designation beginning with C, including the luxurious and not at all compact C6.

Anders: Thanks for the correction.