Word of the week: Mountebank

Mountebank: A charlatan; a seller of quack medicines who attracts customers with stories, jokes, or tricks; a con artist. From Italian monta im banco, one who gets up on a bench (to speak). Pronounced with three syllables.

I’m imagining the members of the New York Times editorial board debating which of several synonyms to use in the lead editorial of September 16, headlined “Donald Trump’s Latest Birther Lie” – “Mr. Trump’s Birther Nonsense” in the print edition – before settling on mountebank.

The midday bulletin arrived as another bizarre moment in the absurdist presidential campaign of Donald Trump: News Alert: Trump admits Obama was born in the United States.

What? It read like some variation on “Trump Finds the Earth No Longer Flat.” But no, Mr. Trump, the ultimate mountebank, was at it again, altering but not abandoning the Big Lie campaign that first made him the darling of wing nuts and racists five years ago: his vicious insistence that President Obama was not born a legitimate American citizen. 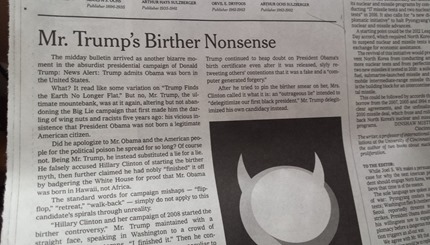 Perhaps the word’s quaintness and relative rarity are what made it irresistible to the Times editors, who figured it would delight some readers and send others scurrying to their dictionaries. Mountebank entered English in the mid-16th century and was used over the decades by Francis Bacon, Samuel Coleridge, and Dante Gabriel Rossetti, among others, but despite ample opportunity is less commonly used in the 21st century. Like charlatan (another borrowing from Italian – a ciarlatano is a babbler or prattler), it carries the whiff of snake oil and three-card monte. (Monte, Spanish for “mound,” refers to the “heap” of cards left after each player has his share; it’s an etymological cousin of Italian monta.)

Beyond the normally staid Times, the Trump candidacy has spurred wordsmiths to new heights of epithet-coinage. Writing for Red State in May of this year, Susan Wright proposed “the gilded toad,” “Don the con,” “the Manhattan bully,” “Herr Drumpf,” and – yes – “the hay-haired mountebank” to describe the Republican nominee. Charles P. Pierce, who writes about politics for Esquire, is partial to “vulgar talking yam.” The online publication Jezebel compiled all the words it had used to describe Trump in 2015 and 2016. (From the latter list, which ran to 70 entries in honor of Trump’s 70th birthday: “neo-fascist real estate golem,” “malignant corn chip,” “neon-tinted hellion,” and “tattered Craigslist sofa” – but no “mountebank.”)

This was not a direct threat to the US today. Imagine President Tweety McThinSkin if this were a major crisis. /5x

Then there’s “short-fingered vulgarian,” coined in the 1980s by Graydon Carter, a co-founder of Spy magazine (and now editor of Vanity Fair).

Benches, or bancos (or the variant bancas) were often invoked in the 16th century. Bankrupt, from French bancque roupte (akin to Italian banca rotta) literally means “broken bench,” supposedly a reference to the smashed stall of a market trader who’d gone bust. Saltimbanco – “leap on a bench” – is a more-dynamic synonym for mountebank. (It’s not to be confused with saltimbocca – “leap in the mouth” – a dish consisting of rolled pieces of veal and ham cooked with herbs.)

Mountebank is the name of “the first open source tool to provide cross-platform, multi-protocol test doubles over the wire.” The program employs “imposters” – clever, that – and pledges to “cure what ails you, guaranteed.” In the Dominion Strategy game, a mountebank is an action-attack card “that is considered one of the strongest cursers,” according to the game wiki. 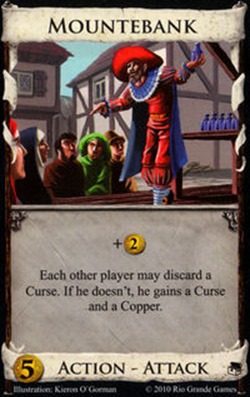 Posted at 06:31 AM in Epithet, Italian, Media, Politics, Word of the Week | Permalink

Thanks for the new word. I don't like Mountebank people, but now I have a new word to call them.