Word of the week: Kayfabe

Kayfabe: /ˈkeɪfeɪb/ In professional wrestling, the portrayal of staged events as “real” or “true.” The term came from the carnival world, where – according to TV Tropes – it is thought to have originated as Pig Latin for be fake. (According to my sources, its original pronunciation would thus have been kee-fabe. No, this doesn't make sense to me, either.) UPDATE: An alternate etymology, also from carnival lingo, is given in the eWrestling wiki: “With money tight, a carny would call home collect and ask for ‘Kay Fabian.’ This was code letting the people at home know they had made it safely to the next town without paying for the cost of a phone call.” (Thanks for that link to reader Dan Freiberg.)

From the TV Tropes entry:

Professional Wrestling adopted the term as a reference to the standard Fourth Wall features of separating the audience from the action. It is meant to convey the idea that, yes, pro wrestling is a genuine sport, and yes, this is how these people act in real life. It is essentially Willing Suspension of Disbelief specifically for pro wrestling.

I’m not a wrestling fan, so my first encounter with kayfabe occurred earlier this year in an unexpected context: the presidential primaries. Specifically, the Donald Trump campaign.

This pissing match between Donald Trump and Fox News over Megyn Kelly just REEKS of kayfabe.

Charles Johnson – a musician and programmer who has written a political blog called Little Green Footballs since February 2001 – isn’t the only political observer who has spotted parallels between the Trump campaign and pro wrestling. Also in March, Oliver Willis, a research fellow at Media Matters for America, published an essay on Medium titled “How Professional Wrestling Explains American Politics (Especially Donald Trump).” Willis notes that wrestling “largely broke kayfabe in the 1990s” when it “admitted that the matches were predetermined.” Nevertheless, the sport “actually got bigger than ever.”

I think Donald Trump breaks kayfabe a lot. Unlike many other politicians, Trump speaks directly to his audience about what it is he’s doing, with an almost meta-commentary about his actions.

Trump will tell his audience “I’m being nice to this guy, but I could get mean,” effectively telegraphing his moves but also signaling to them who they should next vilify. In politics that relies so much on a script, he’s breaking the fourth wall — even though politics are supposedly reality.

It should come as no surprise that Trump would speak the language of wrestling: he’s been involved with the sport for more than a decade through his properties (the Trump Plaza in Atlantic City has hosted wrestling events) and as a participant. In the current issue of The Atlantic, political writer (and one-time speechwriter for President Jimmy Carter) James Fallows speculates about the Trump-Clinton debates, the first of which will take place tonight. One of the “striking aspects” of Trump’s performances during the campaign, Fallows writes, is “dominance.” It goes beyond mere winning:

Midway through the Republican-primary debate cycle, I finally saw the 2007 video of a WWE pro-wrestling showdown whose climax was Donald Trump shaving the head of rival promoter Vince McMahon after Trump’s wrestler beat McMahon’s in a match. You wouldn’t need Jane Goodall or Sigmund Freud to see in this spectacle every ritual of dominance, emasculation, ridicule, and humiliation—even with all allowances made for the phony melodrama on which pro wrestling is built. Once I had seen that video, it replayed in my mind every time Trump stepped onto a debate stage. 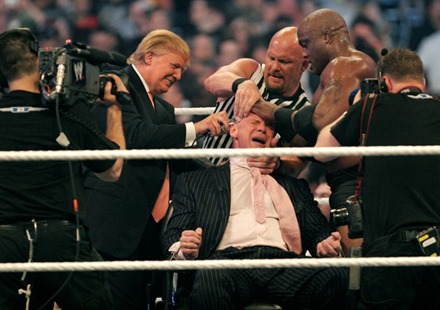 Fallows: “Trump’s constant debat­ing goal is to humiliate a foe. Here, he shaves the head of rival promoter Vince McMahon after Trump’s wrestler defeated McMahon’s in a 2007 WWE bout.” McMahon has endorsed Trump for president, as has wrestling star Hulk Hogan (who expressed a desire to be Trump’s running mate). (Photo: Bill Pugliano / Getty)

One of the first writers to place the Trump phenomenon within the context of wrestling was Judd Legum, the editor-in-chief of Think Progress, who wrote an essay in September 2015 that cited the French philosopher Roland Barthes, who died in 1980, on the semiotics of the sport. In a 1957 essay, Barthes wrote:

One can bet on the outcome of a boxing-match: with wrestling, it would make no sense. A boxing- match is a story which is constructed before the eyes of the spectator; in wrestling, on the contrary, it is each moment which is intelligible, not the passage of time… The logical conclusion of the contest does not interest the wrestling-fan, while on the contrary a boxing-match always implies a science of the future. In other words, wrestling is a sum of spectacles, of which no single one is a function: each moment imposes the total knowledge of a passion which rises erect and alone, without ever extending to the crowning moment of a result.

(Emphasis added, I assume, by Legum.)

In the current campaign, Trump is behaving like a professional wrestler while Trump’s opponents are conducting the race like a boxing match. As the rest of the field measures up their next jab, Trump decks them over the head with a metal chair.

For more kayfabe/Trump reporting, see the satirical site Kayfabe News (“Unreal News About an Unreal Sport”). See also my posts on the Goldwater Rule, deplorables, and mountebank. For a guide to wrestling jargon, see this Wikipedia entry.

And here, just in case a more-suitable occasion doesn’t arise during the next six weeks, is linguist George Lakoff on the sound symbolism of the name Donald Trump (“In short, it names someone who has the power to take advantage of others”). Hat tip: Ben Zimmer.

Posted at 06:30 AM in Jargon, Politics, Startups, Word of the Week | Permalink