« But I wont do that | Main | Fashion word watch: Cold shoulder »

Word of the week: Deplorables

Deplorables: Nounified, pluralized form of deplorable, an adjective meaning “lamentable, very sad, grievous, miserable, wretched” and usually used in reference to events, conditions, or circumstances. The adjective is derived from the Latin verb plorare, to weep or bewail.

The adjective deplorable first appeared in print in the early 1600s. The OED provides one citation for the plural noun deplorables: the journal of Sir Walter Scott, published in 1828: “An old fellow, mauld with rheumatism and other deplorables.” (Mauld is an alternate spelling of a regional usage of mauled that means “fatigued.”)

The OED and other dictionaries now have another noteworthy citation: the remarks of Democratic presidential candidate Hillary Clinton on September 9 at the LGBT for Hillary Gala in New York City. Here’s the relevant section:

We are living in a volatile political environment. You know, to just be grossly generalistic, you could put half of Trump's supporters into what I call the basket of deplorables. Right? The racist, sexist, homophobic, xenophobic, Islamaphobic -- you name it. And unfortunately there are people like that. And he has lifted them up. He has given voice to their websites that used to only have 11,000 people -- now 11 million. He tweets and retweets their offensive hateful mean-spirited rhetoric. Now, some of those folks -- they are irredeemable, but thankfully they are not America."

(Generalistic is not in standard dictionaries, but once again, Clinton“s is far from its first use.)

Clinton went on to describe “the other basket … of people who feel that the government has let them down, the economy has let them down, nobody cares about them, nobody worries about what happens to their lives and their futures, and they're just desperate for change.”

Basket of deplorables was newsworthy for a number of reasons, one of which is the nounification.

But as Ben Zimmer points out in a post published September 10 in Language Log, many –ible and –able adjectives have been converted into plural nouns: consider collectibles, unmentionables, and perishables. And basket of deplorables echoes a phrase familiar in legal circles: parade of horribles, which Ben wrote about in a 2012 Boston Globe column. (Is it possible that Hillary Clinton, a lawyer, drew on parade of horribles to create basket of deplorables? Let’s just say it’s one of the conceivables. Was she thinking, instead, of basket of kisses from the first season of “Mad Men”? It would be pretty to think so.)

Basket of deplorables instantly became a hashtag on Twitter. It was defended by Clinton supporters:

And perversely appropriated by the opposition.

I don't want to merely be IN the #BasketOfDeplorables ; I want my OWN basket #HillarysAmerica

Look at the #BasketOfDeplorables in Pensacola Florida last night! What a horrible statement. #CrookedHillary pic.twitter.com/GfevT0KUjd

(Although the tweet refers to Florida, that’s a large Texas flag to the left of the screen.)

Self-described “libertarian conservative” and Trump surrogate Roger Stone – who has publicly called for the assassination of, among other public figures, Hillary Clinton, Bill Clinton, and Bernie Sanders – envisioned “The Deplorables” as a sort of superhero phalanx modeled after The Expendables (another adjective-to-plural-noun).

I am so proud to be one of the Deplorables #Trump2016 pic.twitter.com/IFD1hfC60w

Compare this appropriation with the co-opting of then-Senator Barack Obama’s remark, at a 2008 campaign fundraiser in San Francisco, that “it’s not surprising” that people in Rust Belt towns “get bitter, they cling to guns or religion.” 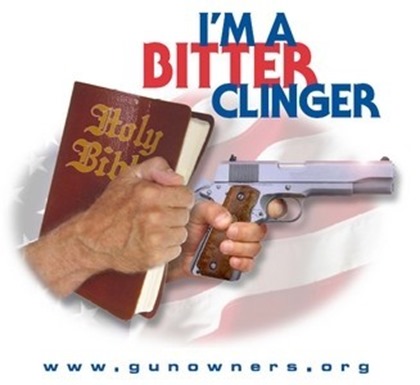 This T-shirt is still sold on the Gun Owners of America website.

On the other hand, you could have this.

Deplorables was frequently misspelled by both sides.

Thank you Hillary, for #basketofdeplorabes. So many many people who insist they are NOT deplorable sure think we're talking about them.

And some people just wanted to change the subject.

See also: Sad and Bare-knuckled bucket of does.

Posted at 07:00 AM in Latin, Politics, Rhetoric, Speeches, Word of the Week | Permalink

Frances: Interesting! I wonder if that's where the "Mad Men" writers picked it up.