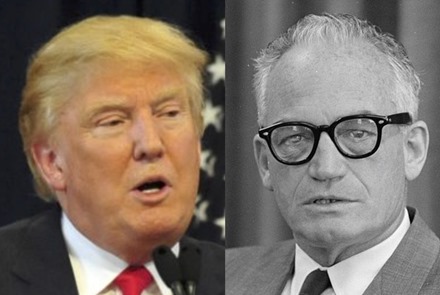 Narcissistic personality disorder. Trump doesn't just have it, he defines it. #trumpdiagnosis https://t.co/2WegZrrlJ7

(Jeffrey Flier is an endocrinologist and former dean of the Harvard Medical School.)

“The Mind of Donald Trump” – by psychologist Dan P. McAdams, who set out to create “a psychological portrait of the man” without having met him, The Atlantic, June 2016

On August 3, the president of the APA, Maria A. Oquendo, M.D., issued a reminder that “breaking the Goldwater Rule is irresponsible, potentially stigmatizing, and definitely unethical.” The “unique atmosphere of this year’s election cycle,” she wrote, “may lead some to want to psychoanalyze the candidates, but to do so would not only be unethical, it would be irresponsible.”

In its coverage of the APA warning, the Washington Post noted that Trump is only the most recent candidate to be subjected to armchair psychoanalysis:

In 1972, Thomas Eagleton withdrew as George McGovern's running mate after it was revealed that he had had been hospitalized three times for depression and undergone electroshock therapy.

In 1988, both George H.W. Bush and Michael Dukakis insisted that they had never undergone psychiatric treatment, after the Washington Times reported on rumors related to Dukakis's mental health. Then-President Ronald Reagan drew some criticism for making fun of the Dukakis controversy by saying, "I'm not going to pick on an invalid."

Since the rule was implemented in 1973, the APA has on occasion modified it. Robert Klitzman, a professor of psychiatry at Columbia University, wrote in the New York Times in May 2016 that the rule did not cover scholarly studies of “historical” figures:

Yet the organization did not address whether the principle extended to living individuals. Still, it clearly aims to bar flip, off-the-cuff remarks to the media.

Klitzman concluded: “Our current presidential candidates present various psychological issues that we ultimately must all assess and weigh on our own.”

UPDATE: Internet friend WIIIAI reminded me of the mocking counter to Barry Goldwater’s 1964 campaign slogan, “In Your Heart You Know He’s Right": In Your Guts You Know He’s Nuts.”

Since that election, which Goldwater lost in a landslide to Lyndon Johnson, “In Your Guts You Know He’s Nuts” has been associated with George W. Bush, Ted Cruz, Newt Gingrich, Pat Buchanan, Australia’s Tony Abbott, and, of course, Donald Trump. I’ve also seen it — with guts misspelled gut’s — attached to President Obama’s image.

Posted at 06:05 AM in Eponyms, History, Politics, Psychology, Slogans and Taglines, Word of the Week | Permalink

Then there is Trump l'oeil, (after the French trompe l’oeil: a style of painting in which things are made to look like real objects, thus fooling the eye), a charlatan with self-idolatry, tyranny-worship disorder. A Trump l'oeil typically uses 'trumpisms' (sarcasm covered in today's post here), as a means to convey the illusion of being a three-dimensional object or worse, a human who knows more than anyone else. Trumpisms are so infectious they’ve been know to lead to mass hysteria, even the plague.

There is evidence of this virulent infection in the followers of a Trump l'oeil called Trump l’oile-ists or loyalists. They are often deluded into making bad bargains. As, in the case of Chris Christie, a longtime friend of Presidential Candidate Donald, who lost out on his hope to be the Donald's Vice-Presidential Candidate. The New York Times today cites that when Christie became governor of New Jersey, the long-overdue $30 million in taxes by the casinos founded by Donald Trump were reduced to a cool $5 million. Since his tax returns have not been made public, we don’t know if this was paid, which is a trumpism that goes beyond talk into action. I think this is called using the Trump card but I am not a poker player.

Really, I'm just being sarcastic. Well, not THAT sarcastic.