The startup had originally been called Restack, which was meant to describe moving, or “restacking,” from a proprietary software stack to open-source software. After the company’s mission changed to software support, the name no longer felt relevant. It was also too descriptive and lacked an emotional charge. The new name, Adrian said, should should excite, inspire, and rally.

I began the renaming process by researching and writing a naming brief to serve as my road map and evaluation tool. I determined that the name needed to appeal to two audiences: experienced software engineers (the talent for hire) and enterprise managers (the hirers). In background and skills, the two groups are very similar and speak the same technical language: their working relationship is more peer-to-peer than boss-to-freelancer. On both sides of the equation, there’s a strong desire for flexibility, freedom, and respect.

The company was so new that its brand personality was still evolving. Nevertheless, I was able to identify a set of core attributes: intelligence, creativity, maturity, and eagerness, with a pinch of nerdiness and gamer enthusiasm thrown into the mix.

I also identified a set of naming objectives – what the name should or must communicate:

Emphatically not on the list: any suggestion of “freelancer,” “inexpensive,” or “temporary.” This is a sophisticated, high-level service, and the name needed to convey that quality.

I also worked from a list of naming criteria – linguistic, legal, and domain considerations. The name could be a “real” (dictionary) word or a coined (invented) one; it could be English or another language; the .com extension was preferred but not compulsory. (.io, .xyz, and .us were all on the table.) Finally, the name needed to be legally available in international trademark classes 35 (business functions) and 42 (scientific and technological services).

Where to start mining for names? Well, Adrian had given me several promising prospects. His own interests include painting, sculpture, music, and nature; his concept of the company suggested that the language of magic, escape artistry, and games might be productive.

DORSAL emerged in the second creative round. (There were three in all.) Its literal meaning is “related to the back or spinal part of the body”; it suggests, among other things, the distinctive and powerful dorsal fin of a shark as well as a strong, supportive spinal column. Power, flexibility, speed, and virtuosity are all right under the surface of the word.

DORSAL passed the trademark screens, but Dorsal.com was parked. I suggested several URL options, and Adrian chose the available GoDorsal.com, which adds the energy of an active verb to the name.

The final touch was the visual brand. I asked designer Michael Troller about how he developed the elegant, effective wordmark you see above, and his answer (via email) is so good that I reproduce it here with only with tiniest edits:

A dorsal fin provides direction, stability and purpose, but is also essential for making fast turns or changes in direction. Dorsal is also associated with the backbone and ideas of strength, durability, flexibility and so on.

We thought of many logos using fins and shapes that might reflect on these themes, but early on I drew in pencil the letter A in DORSAL larger than the others and the immediate impression was that the point of the A was the dorsal fin. I tended to sketch with sans serif fonts due to their simplicity of form and clean geometric shapes.  For color it never seemed to be the right color when we explored marine colors like blue, teal or green. The hotter, heading towards white hot glowing metal colors felt more full of energy and life a vitality that calm sea blue just didn't deliver.

There was a significant exploration of dramatic shapes and bolder, blockier letterforms, but something in the sharp clean lines and simplest geometric shapes that approach the absolute thinnest weight possible (and still be impactful, dramatic). We removed the crossbar from the A to emphasize the simplified fin/triangle.  Perhaps this increases the chance that you might see the A as a fin of a larger animal, a growing moving entity like the Dorsal business concept: most of the idea, most of the potential is below the surface, yet to emerge. This fin works best when it is larger than the other letters, but we expended many cycles making sure we had thoroughly explored the solution-space.  One could see the entire logotype as the animal, but like an optical illusion you might also see the fin as belonging to an even larger animal beneath, invisible, implied, potential.

That's the long/short story of how we created the Dorsal logo. For tools we of course used Adobe’s Creative Suite and Dixon Ticonderoga #2 soft pencils (the working person's Blackwing). This is one of those projects that really needs to be printed out, taped onto the wall and drawn on, doodled and redoodled.

Here’s the design exploration that led to the finished logo: 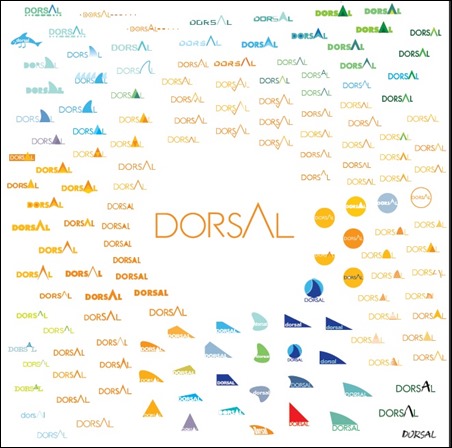 The change from Restack to Dorsal represents a shift from descriptive to suggestive – always desirable in naming. That shift is mirrored in the visual brand, which rejects literal representation in favor of evocative suggestion. Dorsal is still in private beta, but its new brand gives it the power and presence it needs to breach the surface and dominate its territory.

It's a great wordmark, as befits the Perfect Name. (They've, um, got your back.)