Word of the week: Dead-ender

Dead-ender: A partisan who refuses to stop supporting a cause or candidate; a die-hard.

This sense of dead-ender – the most recent of several to have appeared during the term’s history – has appeared regularly during the current U.S. presidential campaign. It’s used as a disparaging tag for zealous supporters of candidates whose realistic chances of prevailing have steadily dwindled. These supporters often self-identify on social media with the hashtag #NeverHillary or #NeverTrump. 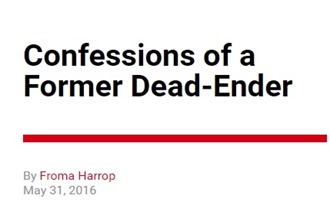 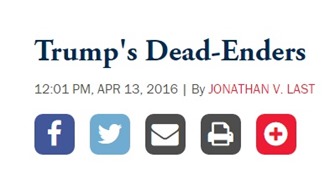 Dead end first appeared in print in 1886 as a description of a pipe or passage with no through way. The figurative sense – a course of action that leads nowhere – arose in the 1920s. (The OED’s earliest citation, from 1922, is from the American writer Michael Arlen, who put the expression between quotation marks: “I felt..that there was a ‘dead-end’ at the end of my life.” Dead End, a play by Sidney Kingsley, premiered on Broadway in October 1935 and ran for two years; its characters were tough teenagers growing up on the streets of New York City during the Great Depression. A 1937 film adaptation featured Humphrey Bogart as one of the Dead End Kids.

By the 1970s dead-ender was occasionally being used, by sportswriters and others, to mean “loser.” That’s the only sense cited in the Wiktionary entry for the term. The late New York Times language columnist (and Nixon speechwriter) William Safire, in a 2003 column about dead-ender, cited a sentence from The Independent  of London (which I traced to 1995): “Neanderthal Man was not in fact a man but a chinless dead-ender who became extinct because he failed to intermarry with our human ancestors.”

Another meaning of dead-ender – “conversation stopper” – emerged in the 1980s, Safire wrote:

The Associated Press did a feature in 1985 on a woman who manufactured buttons.“When I say ‘Buttons,’'' she said, ''it’s a real dead-ender for conversations.”' The same sense of “conversation stopper”' was apparent in a 1995 article by Jeff Lindenbaum in The Seattle Times:  ‘You shouldn’t let your friends pressure you into having sex’ is probably a dead-ender coming from Mom or Dad.”

Dead-ender got its current spin from Donald Rumsfeld, secretary of defense under President George W. Bush, who often applied the term to stubborn Afghan and Iraqi fighters. “From everything I’ve heard, he’s a rather determined dead-ender type,” the New York Times quoted Rumsfeld as saying in 2001 about Taliban Supreme Leader Mullah Omar. “In those regions where pockets of dead-enders are trying to reconstitute, Gen. (Tommy) Franks and his team are rooting them out,” Rumsfeld told the Associated Press in June 2003.

It is today’s replacement for die-hard, taken from the nickname of Britain’s Middlesex Regiment. Its colonel in 1811, wounded in the Battle of Albuera, refused to be taken to the rear, crying, “Die hard, 57th, die hard!” That was preceded in America by the report of George Washington’s last words, which were '”I die hard, but am not afraid to go.'”

Die-hard can have a connotation of nobly fighting in a lost cause, but dead-ender connotes foolhardy unwillingness to accept defeat.

Dead-ender also carries overtones of bitter end, an idiom meaning “the end of a long, difficult process.” Bitter end was originally a nautical term from the mid-18th century; it refers to “the part of a cable which is round about the bits (two great timbers used to belay cables) when the ship is at anchor.” (Source: Online Etymology Dictionary.)

Posted at 06:50 AM in Death, Politics, Word of the Week | Permalink