“Sackcloth and ashes” are ancient symbols of mourning, repentance, and abasement; the phrase appears numerous times in the Hebrew Bible in descriptions of public grieving. Sackcloth – a coarse material that was sometimes made from goat hair – was worn as clothing, symbolizing a renunciation of comfort and luxury; ashes were sprinkled on the head of the mourner as an outward sign of inner devastation.

This is, to put it mildly, a real downer of a retail name. So what was the founder thinking?

I found no answers on the website, only this:

Founder of Sackcloth & Ashes, Bob Dalton, was inspired to help the homeless population when his mother, a hardworking single mother, found herself living on the streets in 2013.

Because of his mother’s story, Bob realized that not all choose to become homeless - that some just need a second chance. He began to call homeless shelters in his area to ask what they needed. They all said blankets. That’s when he founded Sackcloth & Ashes.

(Digression: That comma before “Bob Dalton” in the first sentence has no business being there. And there are no clues anywhere on the site about where “his area” is. I finally found it in a business filing: it’s Monmouth, Oregon.)

There’s been a fair amount of press coverage of S&A since the company was founded in 2014, so I began combing through it. I hit paydirt in Home Front Magazine:

The name Sackcloth and Ashes is ancient Jewish symbolism meaning “mourning” and “repentance.” The idea is that every time a person wraps herself in a Sackcloth and Ashes blanket, it symbolizes mourning over the homeless population and repentance by contributing to a homeless shelter in her area. 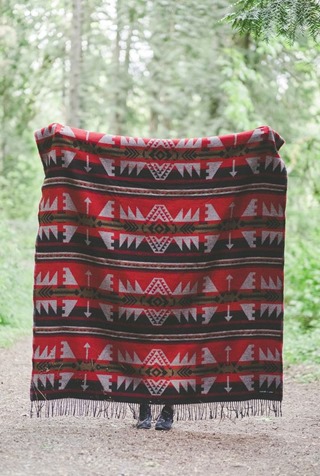 Not the tack I’d have taken in naming the company — not only is the name lugubrious, it’s also in lockstop with the depressingly common X&Y retail-name trend.

There’s something else, at least for me. The combination of “blankets” – especially tribal blankets – and “mourning” prompted an ugly if spurious association: the story (now thoroughly debunked) that in 1837 the U.S. Army distributed smallpox-infected blankets among the Mandan Indians at Fort Clark, in what is now North Dakota. (There was in fact a deadly smallpox epidemic in 1837, but no historical record ties it to Army-distributed blankets. The false story was fabricated by Ward Churchill, a professor of ethnic studies at the University of Colorado, who published “at least six different versions of this accusation against the U.S. Army” between 1994 and 2003, according to research published by the University of Michigan in 2006.)

Then I began wondering about the word sackcloth, which turns out to have a fascinating history.

Sackcloth first appeared in English in the late 13th century, when it signified “mourning garb,” just as it does in the Hebrew Bible. It was, literally, “cloth made of sacks.” The surprise to me was the origin of sack, a word that’s remained more or less unchanged in spelling and meaning – a bag – since Old English and which can be traced back to Greek (sakkos). And where did the Greeks get it? From Hebrew.

The word sak שק in Hebrew and "sack" in English have the same meaning, and this is no coincidence. The English word derives from the Hebrew:

As recounted in Genesis 37:34, when the patriarch Jacob believed that his son Joseph had been killed, he “tore his garments and put sackcloth on his loins and mourned for his son many days.”

What’s unclear is whether Hebrew sak meant “bag” or “sackcloth.” Balashon grapples with this question at some length, with many citations, and finally concludes that “sak meant either bags made of goat hair, or the uncomfortable garments of a mourner (or someone repenting or causing others to repent) made of goat hair.”

There are a couple of English sacks that are unrelated to the material sack. In the 16th century the English began drinking a fortified wine, imported from Spain, called sack. (Shakespeare’s John Falstaff was famously fond of the beverage.) The source of this term is disputed: it may come from French vin sec (“dry” wine – although sack was usually sweet) or from Spanish sacar, to draw out (from a solera, or rack of casks).

The verb sack, meaning “to plunder, is also of “doubtful origin,” according to the OED. It may or may not come from “to put [loot] in sacks.”

Then there’s sad sack, a phrase that means “an inept person” (in Yiddish: a shlemiel, a shlimazel, or a shmendrick, depending on the degree of ineptitude). The term was originally used for a comic book character and comic strip created by Sgt. George Baker during World War II. According to the Wikipedia entry:

Set in the United States Army, Sad Sack depicted an otherwise unnamed, lowly private experiencing some of the absurdities and humiliations of military life. The title was a euphemistic shortening of the military slang “sad sack of shit”, common during World War II. 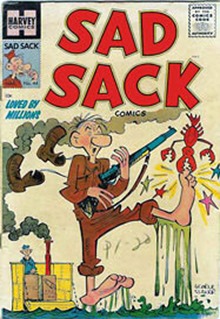 Mel Blanc provided the voice of Sad Sack in wartime radio broadcasts. In 1946, a new “Sad Sack” radio program – minus Blanc – filled in as a summer replacement for “The Frank Sinatra Show.” In neither case was there any mention of shit.

Posted at 06:16 AM in Hebrew, Naming, Negative, Retail | Permalink

In Austin in the 1960s, a local fried-chicken joint appropriated the Sad Sack character for "Private Sanders Chick-a-Go-Go." Still miss them.