« On the Visual Thesaurus: Theres Something About Thing | Main | Word of the week: Aeroese »

The Athenian School, a small, private, progressive institution for grades 6 through 12 in Danville, California, celebrated its 50th anniversary in 2015. Simultaneously, it launched a $12 million capital campaign comprising three major facility improvements. I was brought in to develop a themeline for the campaign, which will span the 2016-2017 academic year and will be aimed at the school’s internal community, chiefly parents, grandparents, and alumni. The themeline needed to be appropriate for web, print, and video; and it needed to be flexible, even modular.

An internal team had created a short creative platform, which I expanded through research and interviews. There was a lot of fascinating historical material to draw from. The school had been founded by Dyke Brown, a Yale Law School graduate and vice president of the Ford Foundation who envisioned a school “with the goal of Periclean Athens – the full development of each citizen … [i]ntellectual growth, fitness of body and character, commitment to humane values, aesthetic sensitivity, and readiness for adult citizenship and leadership.” The school has always emphasized experiential education: outdoor adventure and wilderness experience are integrated into the curriculum along with community service and democratic participation.

In conversations with internal team members, I learned that although they valued academic rigor and the life of the intellect, they didn’t like “words that were too school-y.” (No aspirational, they cautioned.) Instead, they emphasized words like adventurous, dynamic, confident, thrive, forward-thinking, authentic, noble, and globally savvy. They preferred a themeline that incorporated an imperative verb, favorably citing Boston University’s “Choose to be great.”

One word kept catching my eye as I pored over brochures and web content: “meaningful.” The website’s home page, for example, proclaims in large type: “Life is an adventure of intellectual exploration and meaningful contribution.” A brand-positioning document pointed out that students are “encouraged to find ways to apply your individual passions to meaningful, relevant projects.” The message in a 50th-anniversary brochure from the current head of school included this sentence: “We measure our success by graduating students who make a meaningful contribution in the world.”

Meaningful contribution seemed like a promising direction to pursue, especially because of the financial connotation of contribution – appropriate for fundraising.

I presented four themeline concepts, three of which incorporated the concepts of future, adventure, and reaching beyond. The fourth was “Make It Meaningful.” The team chose “Make It Meaningful,” a theme that echoes the school’s commitment to “meaningful contributions” while encouraging donors to give generously.

Here’s how I extended the theme into supplemental messages, pulling apart the verb (make) and the modifier (meaningful) to create a range of expressions. (Body copy written by Shoshana Ziblatt of SZ Consulting Group; logo by Gregoire Vion. Project coordination: Allie Rowe and Judyth Collin.) 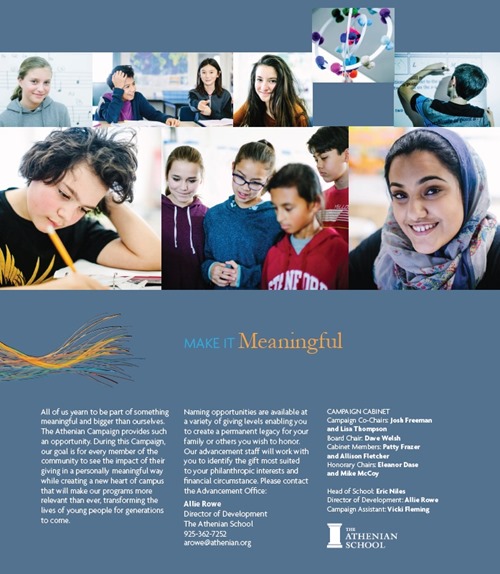 Meaningful Learning and Make the Imagined Real (message from head of school). 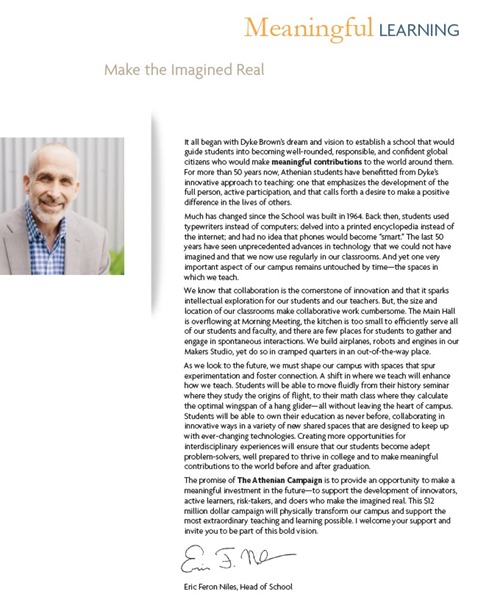 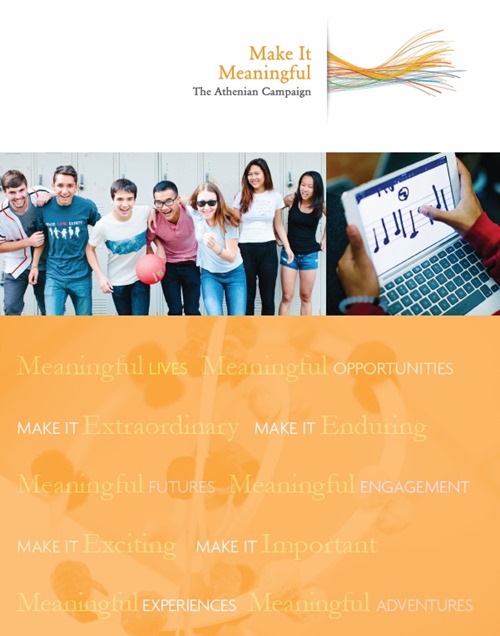 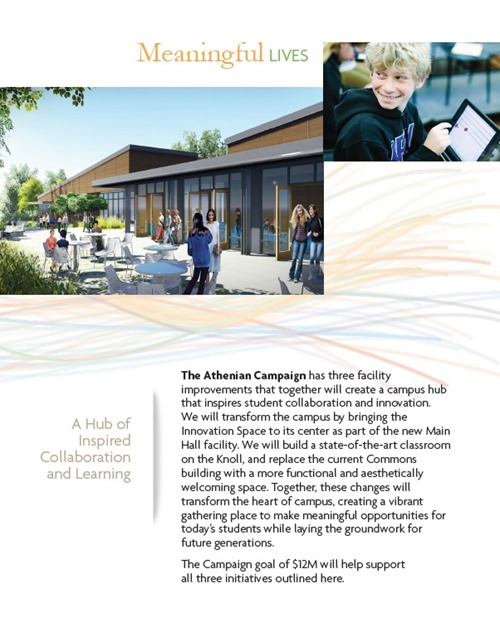 Posted at 06:09 AM in Education, Slogans and Taglines | Permalink