Name in the news: tronc

The press release arrived in inboxes Thursday afternoon, and within minutes it seemed everyone in media or branding was scoffing at it.

Tribune Publishing Co. (NYSE:TPUB) today announced that the Company will change its name to tronc, Inc., a content curation and monetization company focused on creating and distributing premium, verified content across all channels. tronc, or tribune online content, captures the essence of the Company’s mission. tronc pools the Company’s leading media brands and leverages innovative technology to deliver personalized and interactive experiences to its 60 million monthly users. The name change will become effective on June 20, 2016.

Yes, that’s tronc with a lower-case t, an acronym created from tribune online content. The ticker symbol will be TRNC. And the “engine” of all that “content curation and monetization” will be called troncX, because nothing says “innovative technology” like an “X” in the name.

Tribune Publishing Co., based in Chicago, owns some of the oldest and biggest surviving newspapers in the United States, including the Chicago Tribune and the Los Angeles Times. The company, like the rest of the newspaper industry, has been struggling for years.

And now it faces yet another challenge: a storm of ridicule from journalists, brand consultants, and critical civilians.

Of course, negative response to a rebrand is to be expected. Indeed, most renaming announcements are met with jeers. (Everyone’s a critic.) For my part, I keep the Zajonc effect in mind: the tendency of people, after repeated exposure to something they initially disliked, to like the thing more over time. (Zajonc does not rhyme with “tronc”; it rhymes with “science.”)

But, ladies and gentlemen, I am fairly confident that years of exposure will not make me fall in love, or even in like, with tronc. It’s a word that sounds silly at best, ugly at worst, a rhyming cousin of honk, zonk, bonk, and honky-tonk. The lack of capitalization is ridiculous and impractical. (How will, say, the Chicago Tribune, a tronc property, treat the name at the beginning of a sentence?) And it’s a bad portmanteau, a Frankenname soldered together from a heartless DisruptionSpeak buzzword, “online content” (not to mention “premium, verified content”). The story that’s meant to justify it is blistered with other soulless buzzwords: “leverages,” “innovative,” “personalized,” “interactive experiences.”

No, there’s nothing but jonc in that tronc.

Not that it matters especially – the categories are completely unrelated, unless the former Tribune Company decides to branch out into premium, verfieid leather goods – but there is, unsurprisingly, at least one other Tronc. 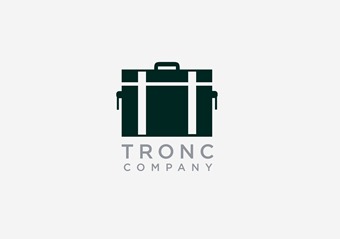 After one particularly good brainstorm, me and my team [sic] fell in love with the simple French word for trunk, tronc. An iconic trunk was created to be the brandmark and holds limitless possibilities.

And tronc has another meaning in French, too.

But enough of French tronc. How has American tronc been received by members of the Fourth Estate? Let’s eavesdrop on their tweets.

So the LATimes, BaltSun, etc are to be owned by tronc, Inc. The robot overlords appear to have won. https://t.co/SfcJvKmXm7

Haha. Here’s the real, verified logo. (Kurt Gessler is the deputy editor for digital news at the Chicago Tribune.)

This is our new logo. Again, tronc. pic.twitter.com/HzfKaJ6D0Q

OK, ignore what it means. What does tronc suggest?

"TRONC TRONC" is how Law and Order starts, right?

Tronc is the sound the closing door makes when dad leaves for a pack of smokes and doesn't come back for fifteen years.

Combine two contemporary, polarizing, compelling figures: Trump and Gronk. And you get #Tronc . Makes sense to me.

@ParkerMolloy "No it's not a phase mom, my name is Tronc now."

There were media in-jokes.

Gawker Media is in a tough spot. But it could be worse. Its name could be "tronc" https://t.co/BMaR11V5QI

"Never argue with a man who buys #Tronc by the barrel."

And there was speculation.

Late in the day, Tronc itself (@troncofficial) tweeted merrily:

What do you think of our new #tronc name and logo? Lots of passionate #discussion on the web so far! pic.twitter.com/l588ejoHSX

Last time I checked, “passionate” was not a synonym for “snarky.” But check out the replies for yourself. My favorite is the only one tronc chose to retweet, probably oblivious to its deadpan sarcasm.

I love them both equally https://t.co/9hhPUT8BVZ

UPDATE, June 18, 2018: Tronc announced it would be changing its name back to Tribune Publishing.

In youth slang 'tronk' can mean internet plagiarist, large girl or (quote) 'trollop skank'. I seem to remember it also being used in Italian adult comics as imitative of the sound of vigorous copulation.

What a forgettable and mildly confusing name. If I came across it for the first (or fifth) time, I would assume it was a French luggage company, or maybe had something to do with elephants.

I couldn't help but think of your post when I saw John Oliver's piece about journalism and tronc :).
http://www.poynter.org/2016/john-oliver-the-media-is-a-food-chain-which-would-fall-apart-without-local-newspapers/425319/

Janelle: I saw that! Thanks!