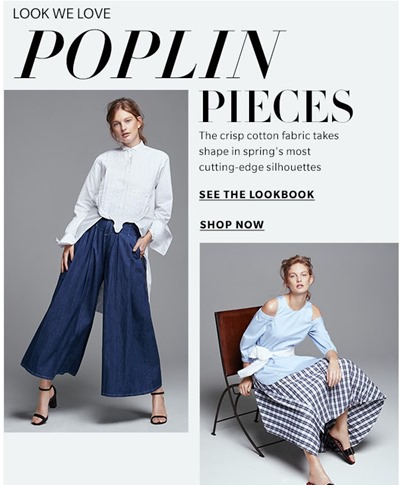 The etymology for poplin is fuzzy, although all sources agree it was adapted sometime in the early 18th century from French papeline, a word that is now obsolete. The American Heritage Dictionary declares that papeline means “papal,” and was applied to fabric made in the papal town of Avignon. The OED disagrees, averring that poplin comes from Poperinge, a town in Flanders noted for its textile production, and that the pope association is a folk (that is, false) etymology. 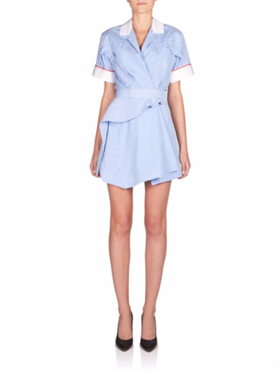 This poplin garment looks like a Halloween waitress costume, but is in fact a “Striped Poplin Crossover Dress” from the designer Carven, and it’ll set you back $490 at Saks.

If poplin does in fact derive from Poperinge, it would be one of many fabric names derived from their places of origin, including damask (Damascus), muslin (Mosul), lawn (Laon), tweed (the Tweed River in Scotland), calico (Calicut, a city on the Malabar coast), denim (serge de Nimes = serge from the French city of Nimes), and madras (the city in India).

Posted at 06:34 AM in Fashion, Religion, Word of the Week | Permalink

"Poplin shirt," to those of us who toiled for Uncle Sam's armed forces way back when, was a lightweight khaki shirt, part of the Class B uniform. I remember it most for its willingness to wrinkle in any relative humidity over 10 percent.

I mentally classify "poplin" as a "Little Women" word, since I'm sure that's where I first encountered it. Along with charabanc and many more.