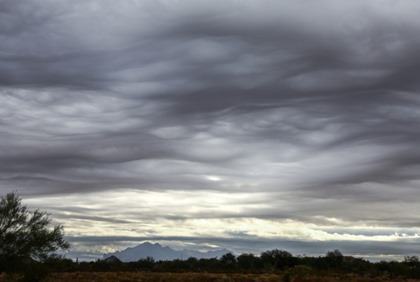 Asperitas was accepted by the World Meteorological Organization last summer into the International Cloud Atlas as the first novel cloud type identified in more than 60 years. Its acceptance can be credited to “the most lovable lobbying group ever” (according to this CityLab article): the Cloud Appreciation Society, whose founder, Gavin Pretor-Pinney, is the subject of a wonderful article by Jon Mooallem in last Sunday’s New York Times Magazine. Pretor-Pinney, a Briton, had identified and named the formation back in 2006, when an Iowa woman named Jane Wiggins posted photos of an enormous dark cloud in the Cloud Appreciation Society’s online gallery. Wiggins had thought the cloud was unique:

But the anomaly Wiggins thought she had captured wasn’t actually anomalous. Similar photos turned up in the Cloud Appreciation Society’s gallery from Texas, Norway, Ontario, Scotland, France and Massachusetts. Pretor-Pinney assumed that this phenomenon was so rare that, until now, no one had recognized it as a repeating form and given it a name. “As the hub of this network, a network of people who are sky-aware,” he said, “it’s easier to spot patterns that, perhaps, weren’t so easy to spot in the past.” …

He supposed, if you had to, you could call this thing an undulatus — the standard classification for a broad, wavy cloud. But that seemed to be selling the cloud tragically short, stubbornly ignoring what made it so sublime. This was “undulatus turned up to 11,” he said. So he came up with his own name for the cloud: asperatus. (The word “asperatus” came from a passage in Virgil describing a roughened sea; Pretor-Pinney had asked his cousin, a high-school Latin teacher, for help.)

In 2014, when the WMO was preparing its first new edition of the Cloud Atlas in 40 years, it formed a task force to consider new submissions. Asperatus was high on the list:

Except, the new cloud wasn’t asperatus anymore; it was now asperitas. The Task Team had demoted it from a cloud “variety,” as Pretor-Pinney had proposed, to a “supplementary feature,” and the elaborate naming convention for clouds required supplementary features to be named with Latin nouns, not adjectives. “One of those things that’s so close, but different,” Pretor-Pinney told me, with a tinge of amusement and resentment.

Read the rest of Mooallem’s article; it’s a gem.

Posted at 06:11 AM in Latin, Neologisms, Science, Weather, Word of the Week | Permalink