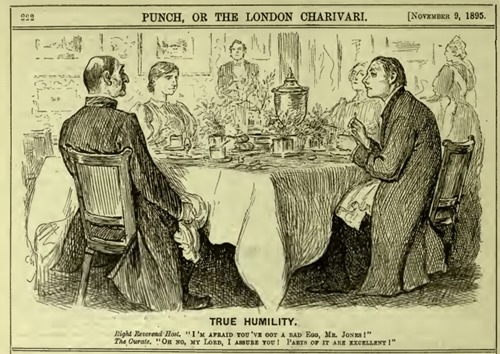 Right Reverend Host: “I’m afraid you’ve got a bad Egg, Mr. Jones!”
The Curate: “Oh no, my Lord, I assure you! Parts of it are excellent!”

Yesterday, at Berkeley Bowl Marketplace, aka Best Grocery Store in the World, I spotted Curate’s Nacks … I mean, Curate Snacks. 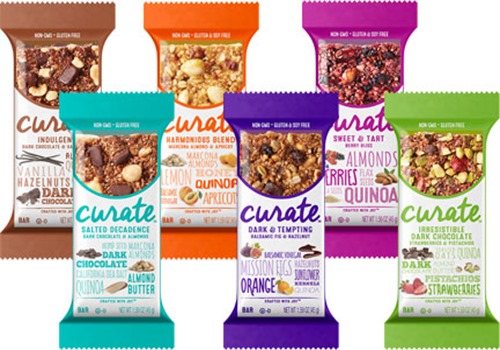 Are they even partly good? I can’t say yet, because I’d already filled my snack quota with Pop Art* nori-sesame popcorn. But I can say a thing or three about the brand.

The name, for starters. The verb form of curate – fancy talk for “edit” or “organize” – has been on lists of the worst, most overused, and even banished words since at least 2009, when I nominated it as a Word of the Year. (I re-nominated it in 2011.) As the name of a snack brand, it’s defined thus (from the About Us page): 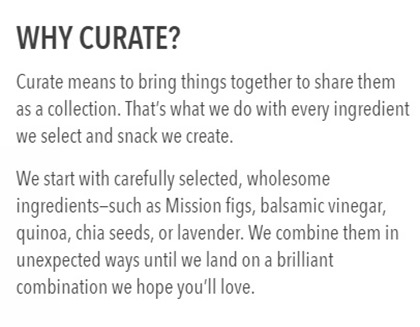 “Curate means to bring things together to share them as a collection”? Well, not exactly, according to the OED – which, by the way, identifies the verb to curate as “orig. U.S.” and provides as a first citation the 1934 Webster’s New International Dictionary of the English Language. (Henry James used curated much earlier, in 1870 – “a most delightful old curated manor house” – but the word seems to have languished afterward.) The OED definition is “to act as a curator of (a museum, exhibits, etc.); to look after and preserve.” Sharing is not part of the job description, but sharing is trending, so in it went on the snack-food site.

Curate is a back-formation from the much older Anglo-Norman curator – “one who has the care of souls” – which appeared in Piers Plowman in 1362. This curator is almost identical in meaning to the noun curate (“a spiritual pastor”), which also dates to the 14th century. The word derives from the Latin root that also gives us cure and accurate (which originally meant “executed with care”). In the Church of England, a curate is a priest in his or her first post after ordination. That’s the curate of the Curate’s Egg, a term that became shorthand for something that’s obviously bad but is euphemistically described as having a few good features.**

By the way, curate is unrelated to curare, a toxic substance traditionally used by certain indigenous South American groups to poison their arrow. Curare resulted from a mishearing of a Carib word that more closely resembles woorari or wourali; the c represents an initial “click” consonant.

Here’s what I found most curious about Curate Snacks: its parent company isn’t one of the big food manufacturers like Kraft or even an artisanal startup. It’s Abbott Laboratories, “a health care company best known for heart stents and diagnostic equipment,” as the Chicago Tribune put it in February, when the brand was launched:

Abbott said it is focusing on nutrition and flavor. The company boasts that each bar contains about the same amount of protein as a medium-sized egg and has fewer than 200 calories.

Its marketing of Curate bars also hits on hot food trends that are perceived to be good for you. All six varieties are gluten-free and five don't contain soy products, according to the packaging. The company also said the ingredients are not genetically modified.

Abbott isn’t entirely new to the nutrition market: It’s the brand behind Similac baby formula and Ensure nutrition supplements, as well as specialty products for athletes and body-builders. Curate, however, is “one of the first nutrition brands Abbott has launched in about 15 years,” according to a company spokeswoman.

I last wrote about Abbott in 2012, when the company announced that its new pharmaceutical spinoff would be named AbbVie – a Frankensteinish concoction whose good qualities, if they exist, have not revealed themselves to me in the intervening years. I’m skeptical about Curate, too: Many people will hear only cure and be wary of medicinal claims, while others will be puzzled by the “collection” connotation. To me, the name is sterile and lacking in emotion. Its ingredients may be nutritious, but the whole is less than the sum of its parts.

* Also an interesting name! And an excellent product, too. But I digress.

"Curate Snacks" is an especially unfortunate name if you're a Sweeney Todd fan: http://www.tcm.com/mediaroom/video/469616/Sweeney-Todd-Video-Clip-A-Little-Priest.html

Jessica: I can't believe I missed that -- I'm a huge fan of Sondheim and Sweeney!

For those unfamiliar with this great musical, here's the relevant lyric from "A Little Priest," Mrs. Lovett's cheery carol to the tastiness of human flesh after it's baked into her meat pies:

Heavenly
Not as hearty as bishop, perhaps
But then again
Not as bland as curate, either.

What a strange, cryptic, un-food-like name. I want to read it as, "cutrate." For some reason, I want to see an acute accent, as in "curaté." I assume Abbott did focus groups. So I must also not be in the target market.

I will buy a bag of each variety, inscribe a catalogue number along the bottom edge of each one, so that it would not be too visible; and then put them away in my cupboard for future reference. They would be too precious to consume.

Susan: See, you're a curator!