Word of the week: Motto

Motto: A brief statement that expresses a goal, ideal, or principle. From the Italian motto, “a saying or legend attached to a heraldic design,” and ultimately from Latin muttum (“grunt” or “word”). Related to French mot (“word”) and English mutter (“to mumble”).

I’ve written so much and for so long about slogans and taglines that I was surprised to find that I’d never written about the meaning and uses of motto. I’ll get to the distinctions between those words – motto, slogan, and tagline – in a bit. First, though, the reason to talk about motto this week.

It appeared in a front-page story in the San Francisco Chronicle about a controversy in the city of Oakland. I live in Oakland, and this was the first I’d heard of either the controversy or the motto. 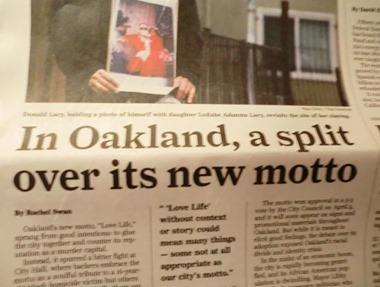 “In Oakland, a split over its new motto.”

The motto, “Love Life,” which was approved by a 5-3 vote of the City Council on April 5, “pays tribute to LoEshe Adanma Lacy, whose first name means ‘Love Life’ in a Nigerian language,” wrote Chronicle reporter Rachel Swan. “LoEshe was shot to death in 1997 as she sat in a car near MyClymonds High School.” After her death LoEshe’s father, the actor and comedian Donald Lacy, created the Love Life foundation in her memory. He presented a slide show at a public hearing in Council chambers.

The controversy is partly racial: The motto’s chief advocate, Council President Lynette Gibson McElhaney, is African American; its chief detractor, Mayor Libby Schaaf, is white. In an email, Schaaf warned the Council that the motto could subject the city to trademark lawsuits because it’s already in use by other organizations, including antiabortion (“pro-life”) groups. “‘Love Life’ without context or story could mean many things — some not at all appropriate as our city's motto,” Schaaf said in the email. The email “prompted jeers” at the public hearing, Swan reported.

Lacking context, it’s hard to know whether the motto is intended as an imperative or a modifier-noun phrase. (Or whether it’s meant to subtly evoke “Black Lives Matter.”) That ambiguity was played to elegant advantage in the original slogan (note: not a motto) for Viagra: Love Life Again.

From a full-page ad in the October 2000 issue of Boating magazine.

You can interpret the Viagra slogan in either of two brand-appropriate ways: Enjoy your life again or Get your love life back. That’s fine for an erectile-dysfunction drug, but “get amorous” is arguably not appropriate for a city motto.

As for why “Love Life” is a motto and not a slogan or tagline – well, definitions can be imprecise. Generally speaking, though, a motto is permanent and often attached to an object (like the original heraldic shield), and in the Western world, it’s often in Latin. “Fiat lux” – let there be light – is the motto of the University of California; “E pluribus unum” is the motto of the United States. But mottos can also be informal, like Google’s “Don’t be evil.”

A slogan (from the Gaelic sluagh-ghairm, a battle cry) is usually temporary and attached to a promotional campaign (although some definitions of slogan call it a motto). Coca-Cola has changed its ad slogans frequently over the last 130 years; some of the less-memorable ones include “Three million a day,” “Pure as sunlight,” and “For people on the go.” (The current slogan is “Taste the feeling.”)

A tagline is more permanent, and is usually attached to an entire organization or company. Nike’s “Just Do It” – inspired by the last words of murderer Gary Gilmore – is justly famous. The zillion-and-one interchangeable “passion” taglines are justly mockable.

While researching this post I came across something I’d never heard of: motto-kiss, for which the OED gives this definition: “sweetmeats having poetry, mottoes, &c., rolled up in fancy papers for the amusement of a party.” The OED says the term is “rare” and gives just two example sentences, one from an 1858 dictionary of “trade products,” and one from a 1908 O. Henry story for the New York Sunday World Magazine: “I want some of his motto kisses. There's nothing in the Broadway shops half so good.”

Read more about taglines and slogans.

Posted at 06:00 AM in Oakland, Slogans and Taglines, Word of the Week | Permalink