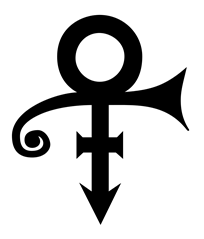 Prince referred to the mark not as a glyph but as the “Love Symbol”; glyph was, at the time, an obscure word used mostly in descriptions of ancient (and especially Mayan) art. (The OED still labels the “symbol” definition of glyph “rare.”) If the average American had heard of a glyph, it was likely in a combining form such as petroglyph (a rock carving, seen in the southwestern U.S. and other places) or hieroglyph (“sacred carving,” as in the Egyptian writing system).

Glyph was popularized in the English-speaking world by popular-culture journalists. Before 1993, the New York Times citations for glyph mostly appear in the context of archeology or, occasionally, in reference to a musical work by the 20th-century composer Lou Harrison titled “The Glyph.” Glyph also appeared in industry jargon, as in a September 1966 article about airline signage: 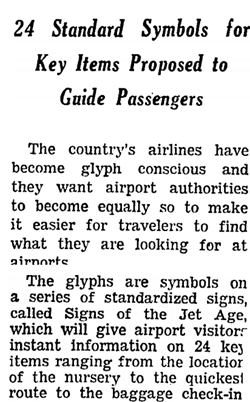 In the early 1990s, the Xerox Corporation was “engaged in a quiet research project code-named Glyph,” wrote Times technology reporter John Markoff in 1991. He noted: “Several industry executives familiar with the project said Glyph would permit a single sheet of paper to serve as both a human-readable and machine-readable document.”

The Times’s first mention of Prince’s new name appeared in a November 28, 1993, Times Style section article, “A Prince Is a Prince Is…”. Reporter Neal Karlen first called the symbol “an unpronounceable pictograph” and then, three paragraphs down, “an unpronounceable glyph.” After that, “unpronounceable glyph” became the epithet of choice for all reporters: the Times’s Jon Pareles began using it in July 1994, and it appeared frequently in obituaries and other articles about Prince’s life and death. (“Unpronounceable glyph” even appears in the 1999 Jonathan Lethem novel Motherless Brooklyn, when the narrator encounters “The Artist Formerly Known As Prince” on the cover of Vibe, with the “unpronounceable typographical glyph with which he had replaced his name” shaved into his hair at the temple. The narrator attempts to pronounce the symbol as “Skrubble” and “Plavshk.”)

The Love Symbol wasn’t just unpronounceable, it was unprintable – until Prince sent news outlets a 3.5-inch floppy disk with a custom-designed font. The disk was a collectible item even before Prince’s death.

Added to my collection: 3.5" floppy given to press when Prince changed his name. Contains a font w/ one symbol in it. pic.twitter.com/mNL0eOHDGI

There’s more to the story, according to a Wired story published last week:

The Love Symbol was whipped up during a frenzied two days, was largely inspired by Carmen Electra, and was, from the beginning, about much more than business hijinks….

In 1992, Mitch Monson was working at Paisley Park, Prince’s recording compound in Chanhassen, Minnesota. The musician’s team had hired HDMG, where Monson was a partner and creative director, to create graphics for some music videos. The album still didn’t have a name, but the videos included “7,” “SexyMF,” and “My Name is Prince.” One day Prince’s head producer approached Monson and Lizz Luce to say Prince needed a symbol. She didn’t say why—Monson and Luce assumed it would decorate an album cover—but said he wanted the icon to fuse the astrologically inspired Mars-male and Venus-female symbols, and he wanted it soon.

“We just took off right away,” Monson says. The two designers toiled away until morning, sketching ideas until Prince came in and quickly selected the design now inextricably linked with his identity. After that, Monson and Luce barely altered the drawing. “The one you see now was almost untouched. We did very little adjustment to that particular mark at all,” Monson says.

Since 2006, the Glyph Comics Awards have recognized the best comics of the previous year created by, for, and about people of color. The awards are named for the blog Glyphs: The Language of the Black Comics Community.

And Glyph Publishing Arts is a small design and production house in Marin County, California, with which I have worked on a couple of very satisfying book projects.

This is apparently not etymologically related to "glyphosate," the herbicide sold by Monsanto as "Roundup."