« On the Visual Thesaurus: Common sense | Main | Word of the week: Glyph »

That photo, via TechCrunch, is a giveaway: Gateway is California’s first incubator for cannabis startups (also known as ganja-preneurs). According to an East Bay Express article published last November, “Gateway LLC is backed by a leading weed industry holding company, MJIC, Inc., in partnership with ‘entrepreneur evangelist’ Ben Larson and Carter Laren, a director and mentor for the Founder Institute, ‘the world's largest entrepreneur training and startup launch program’.” Its online address is gtwy.co. And the gateway in the name is a sly allusion to gateway drug, defined by the OED as “a drug (such as cannabis or alcohol) perhaps regarded as relatively harmless or non-addictive in itself but perceived as leading to the use of hard drugs such as heroin and cocaine.” The term originated in the U.S.; the OED’s earliest citation is from a 1982 article in the Journal of Drug Education: “The course was attitudes toward the use of the ‘soft’ or ‘gateway’ drugs (i.e., tobacco, alcohol, and marijuana).”

I spotted another twist on gateway drug at Altered State, a new exhibit at the Oakland Museum of California that examines marijuana’s role in California’s history, economy, and culture. 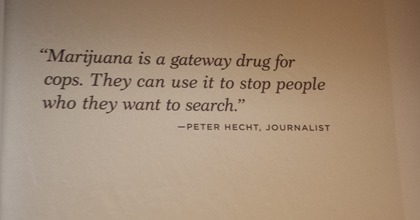 “Marijuana is a gateway drug for cops. They can use it to stop people who they want to search.” – Peter Hecht

Of course, Gateway Incubator is also promising a different sort of gateway: a portal to success and wealth. 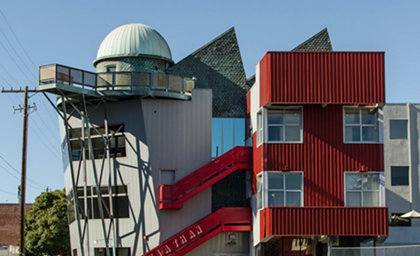 Weed Week: a series of posts from 2014 on cannabis branding (Fritinancy)