“Because no one knows and like AT and T.”

It’s 25% of our name, but it’s 100% of what we do. The “&” in AT&T literally means “and,” but it speaks to everything we stand for. It’s all about the power of connectivity to push things forward and make things better for you, our customers. That’s why you’ll see a new ad campaign from us during the Masters. It’s called the “Power of &.”

There’s lots more where that came from.

“With and, we’ve expanded the idea of what a bank should be.”

What are the odds? Pretty high, actually. Ampersands have been trendy for years now: see my previous posts Ampersandwich, Ampersandstorm, and Eat at X + Y, and also my Pinterest board Shop at X & Y! There’s an Ampersand Agency in Austin, an Ampersand Branding in Kansas City, an Ampersand flower shop in San Francisco, an Ampersand Gallery in Portland (Oregon), an Ampersand Hotel in London (UK). They all have pretty much the same idea about their shared name. Here’s how the hotel puts it: “The Ampersand Hotel’s unique concept is inspired by the capital's world-famous museum district and the iconic ampersand symbol, which illustrates the hotel's role in connecting its guests to the best of South Kensington.”

Every so often a creative director comes up with a legitimately clever ampersandy idea. Here’s Dun & Bradstreet’s logo, a fairly recent upgrade, which melds the initials d and a b to form that … let’s all say it … iconic ampersand symbol. 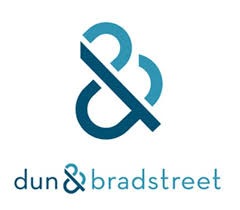 Thankfully, there’s no blather here about “33.33% of our name but 100% of what we do.” Sometimes a picture really is worth a thousand words.

Credit for the A&T tip to Ben Yagoda, who called the slogan “typographic anthimeria” — the use of one part of speech (or symbol, I suppose) as another part of speech.

More on the ampersand from Mary Norris, the New Yorker’s “comma queen.”

Posted at 06:05 AM in Advertising, Ampersand, Banking, Telecom, Trends | Permalink

It's like using a 228-word subhead to explain your "creative" headline.
It's like big companies talking to themselves.

Dan: As they do. See also http://nancyfriedman.typepad.com/away_with_words/2016/03/a-zen-koan-from-google.html

& no one said, "It's cheesy to rip off the bank's creative?"

I shudder at the thought of the navel-gazing jargon-fests that produced these feats of creativity ...

Bob: AT&T's agency may have started working on the campaign before the P&N ads broke, and then reasoned that it didn't matter because who cares about a bank in Western Australia.

Of course, on YouTube and Google there are no geographic boundaries.