For want of 100 properly functioning thyristors, the Bay Area Rapid Transit (BART) system has been hobbled for almost a week. The parts – each smaller than a coffee cup lid and costing about $1,000 – control the power of the trains through the accelerator pedals. On the morning of March 16, 50 BART trains were damaged by a power surge on a stretch of track in Contra Costa County; the transit agency was forced to shut down* service between the North Concord and Pittsburg/Bay Point stations, and passengers were ferried six miles on buses. Thyristors were eventually identified as the cause of the power surge. [Update: I stand corrected by commenter Cthulu, below.] 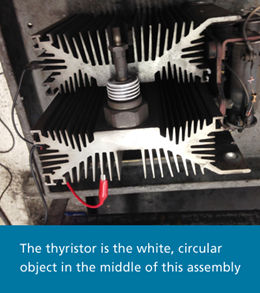 The necessary thyristors have been on backorder for at least seven months. They’re made by Powerex in Plattsburg, New York, and sold to BART by Bombardier Inc. in Quebec. Bombardier also makes BART’s trains (and Ski-Doo snowmobiles).

Beginning last Wednesday, inconvenienced passengers took to Twitter to complain. The official response was so strikingly candid – and, at times, bleak – that it drew the attention of the Los Angeles Times, the New York Times, and other media outlets.

@colinjjm Whether filled by raindrops or a fire hose, eventually one's cup can't hold any more water. BART is at capacity.

Like @iamjohnoliver has said on @lastweektonight, infrastructure isn't sexy - but without it, no one moves. #ThisIsOurReality

But our capital need is absolute; regardless whether we spill oceans of ink or say nothing at all, #ThisIsOurReality https://t.co/JSwTCbRFZ1

@shakatron BART was built to transport far fewer people, and much of our system has reached the end of its useful life. This is our reality.

Bay Area Rapid Transit will celebrate its 44th year of operation on September 11, 2016. The system began tweeting in July 2008; the team currently in charge of BART’s Twitter account consists of Alicia Trost and Taylor Huckaby, and it was Huckaby who produced the most-commented-on tweets. A 27-year-old native of Arlington, Texas, Huckaby has worked at BART for only a year and is pursuing a master’s degree in public transit administration at San Jose State University. As an undergraduate, he worked for the re-election campaign of Louisiana’s Republican governor, Bobby Jindal, but became disillusioned with conservatism and switched his registration to the Democratic Party. He told the New York Times that he “has not been reprimanded” for his honest tweets, and that his bosses are “fantastic and supportive”:

“Most government social media folks are not really given the leeway to respond to people in a way that’s authentic,” he said. “They give the canned response, the ‘we’re sorrys,’ the automation.”

* In the NBC story, the reporter uses “shuttered” instead of “shut down” or “closed” – a substitution I’ve been seeing a lot lately. Anyone want to weigh in?

Posted at 06:00 AM in Greek, Transportation, Twitter, Word of the Week | Permalink

Small typo: it should be "thermionic tube" (because electrons are released by heating an element).

But an interesting journey from wondering why an obscure bit of technology should be your word of the week, to an example of intelligent use of social media.

I haven't really looked through the data thoroughly, but after glancing through the hits for a couple of decades, I'd say it appears that the figurative sense is on the rise in recent years.

@Jonathon: I picture an elegant old train with wooden shutters. A hand reaches across, from just out of the frame, and slowly lowers the slats...

Thyristors were *not* identified as the cause of the power surge. The thyristors were burned out by the high voltage spike on the affected section of track. This causes the propulsion motors to stop working and the affected cars to be taken off the trains.

Cthulu: Thanks for clarifying!