Word of the week: Cache-coeur

Cache-coeur: A style of women’s blouse that crosses in front and secures at the waist or under the bust. From French (where it’s cache-cœur), meaning “hide the heart”; pronounced (roughly) cash-coor. Sometimes called surplice or simply wrap-front. 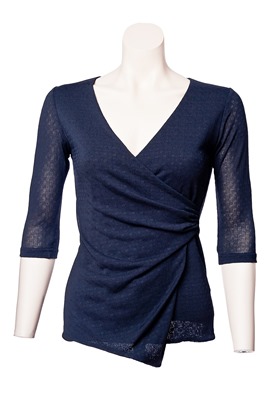 I had never encountered this term until I stumbled upon it while idly scanning the Uniqlo website. The Japanese-based retailer, which operates in 14 countries (and whose name is pronounced YOU-nee-klo, from “unique clothing”), has used the term more than once in product descriptions. Here’s one item (now out of stock) from a collaboration with the designer Ines de la Fressange: 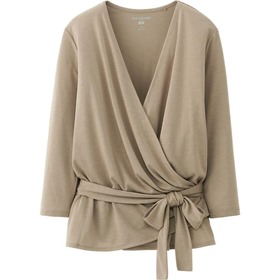 And here’s another, higher-cut garment: 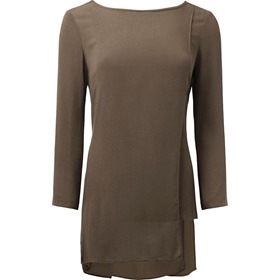 This “Tie Back 3/4 Sleeve Tunic” (out of stock in the brown color) is described thus:

This stylish tunic is part of our collaboration with Muslim fashion designer Hana Tajima. A belt in the back allows you to adjust the waist shape to your liking. The cache coeur-like style is great for elegant, sophisticated looks, and the simple design goes with anything.

Not only was I just learning the definition of cache-coeur, but I’d had no idea that Uniqlo – best known for inexpensive T-shirts and lightweight down jackets, and for furnishing the uniforms for Japan’s Olympic teams in 1998, 2002, and 2004 – had a rather extensive “Hana Tajima Modest Wear Collection” (“an exclusive line that fuses modern designs with traditional values and exceptional comfort”) that includes hijabs in several colors and patterns. It’s a smart move for the huge chain, which has operated stores in at least two Muslim-majority countries, Indonesia and Bangladesh, since 2013, and in other countries with Muslim populations – including France, Germany, and the U.S. – even longer.

Cache Coeur is also the brand name of a French lingerie company specializing in “original designs representing a new generation of moms and moms-to-be, in touch with their feminine side!” – including nursing bras, tights, and maternity swimwear. 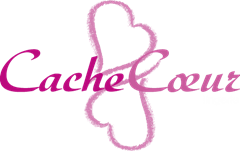 The company also sells “maternity bolas,” metal spheres on a chain to be worn around the neck. According to the product copy, “the sound of the chime inside the bola is heard by the baby from the 20th week, and this sound will keep the baby calm after giving birth.”

Posted at 06:45 AM in Fashion, French, Word of the Week | Permalink