It seems like only yesterday – it was, in fact, just over two months ago – that linguists and political pundits were parsing schlonged, a derivative of a Yiddish vulgarism for “penis” that had been emitted by presidential front-runner Donald J. Trump in his disparagement of Democratic candidate Hillary Clinton (“she got schlonged”).

It turns out that was just a warmup for the current penis-palooza we’re now seeing in commercial and political language. And it’s not just any old male genitalia that are commanding center stage: it’s undersized ones.

My first exhibit: the “Wiener Wars” ad campaign launched last week by Checkers and Rally’s, the jointly owned chain of drive-through restaurants with locations in 28 states and the District of Columbia. The company resulted from the merger in 1999 of Checkers (based in Mobile, Alabama) and Rally’s (based in Tampa, Florida); individual restaurants bear one name or the other, not both.

The ads are a direct challenge to larger rival Burger King, which is attempting to expand its monarchy, and belie its name, by selling hot dogs. Unlike BK, Checkers and Rally’s uses a synonym for hot dogs, wieners, that – as every 9-year-old knows – is a slang term for “penis.”* The rest of the copy is similarly pitched at playground level: “It’s time to compare wieners.” “So as Burger King shows their wiener in public for the very first time…” “Overcompensating, anyone?” And, of course, the hashtagged, masturbatory #wienersmackdown. 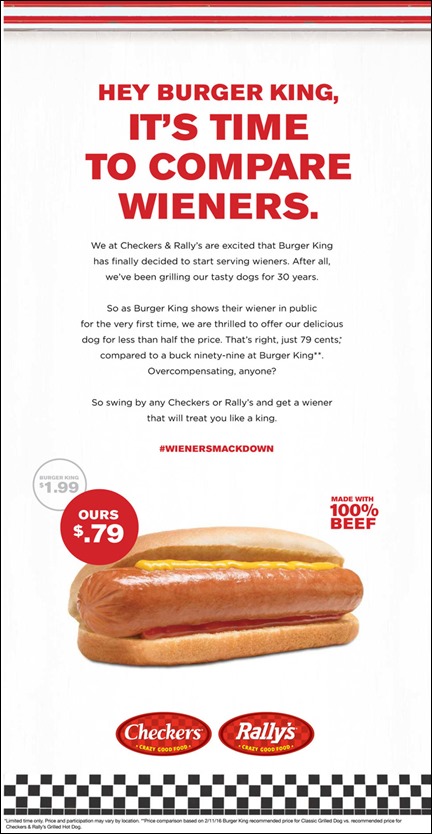 Ours is bigger than yours.

It wasn’t the first, or the last, small-penis taunt of week. On February 22, news organs (sorry) reported that Adolf Hitler had had a micropenis (scientific term: hypospadias). This probably useless fact was unearthed by the historians Jonathan Mayo and Emma Craigie, who’d read the Führer’s medical records as part of the research for a book they published last year. (Hitler also had only one testicle. You’re welcome.)

Then, on February 28, came two more teeny-weenie wisecracks. The first came from U.S. Senator Marco Rubio, who is campaigning for the Republican presidential nomination. In what the candidate may have thought was a display of rapier-like wit, he attacked his rival, Donald Trump, for having “small hands.”

“I’ll admit, he’s taller than me,” Rubio told a enthusiastic crowd in Roanoke, Virginia. “He’s, like, 6-2. Which is why I don’t understand why his hands are the size of someone who’s 5-2. And you know what they say about men with small hands…” Pause for howls and snickers. “…you can’t trust ’em!”

Comment begins at :50. I’d always heard it as small feet. Whichever the appendage, Snopes says the comparison is spurious.

It’s not the first time in Trump’s storied career that his hands have come under scrutiny. The satirical magazine Spy (1986-1998) frequently used the epithet “short-fingered vulgarian” to describe Trump, who was then known merely, as Vanity Fair editor Graydon Carter put it recently, as a “flashy go-getter from an outer borough” of New York.

Finally, you may have missed this line from Sunday night’s Oscars presentation, but I – by now exquisitely attuned to all allusions microphallic – caught it immediately. It came from Sacha Baron Cohen, who, in character as the clueless rapper/”token black presenter” Ali G., made a mock-plea for “diversity” to include “those little yellow people with tiny dongs.” A racial slur? Mais non: “You know — the Minions.”

* Sometimes spelled weiners. This semantic overlap was the source of no end of puerile mirth back in 2011, when then-Congressman Anthony Weiner – whose surname is pronounced weener, like the hot dog – was caught in a couple of sexting scandals.

A British friend told me years ago he had lerned the following verse, to be sung to "The Colonel Bogey March":

I cherish this for the perfection of the third couplet but I have to say it makes me doubt the Hitler claim.