Name in the news: Draper James

There’s a curious little kerfuffle going on between two businesswomen whose flower-shaped logos are suspiciously similar in shape and embellishment. What makes it especially newsworthy is that one of the businesswomen is the actress Reese Witherspoon, and she’s the one being sued.

But that’s not the only thing I find interesting about Ms. Witherspoon’s retail venture, which is called Draper James, after the actress’s grandmother (Dorothea Draper) and grandfather (William James Witherspoon). For me, that name – no matter how sweetly familial – is all too reminiscent of another, much older retail chain, Draper’s & Damon’s.

First, though, take a look at the logos in question (image via TMZ, which broke the story with a classic TMZ headline: “Reese Witherspoon Sued: She’s a Common Magnolia Thief!”). 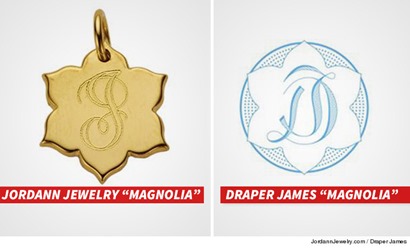 Jordann Jewelry, which sells the charm on the left and uses the six-pointed shape in its logo, is owned by Jordann Weingartner, who filed for trademark protection of her company name and the logo in February 2009.

Note the description of the logo: “circles with irregular circumferences; miscellaneous circular designs with an irregular circumference.” No mention of magnolias or any other specific flora. Still, one of Ms. Weingartner’s lines is called the Magnolia Collection; she told the New York Post (which called her a “Palm Beach, Fla., mother of three”) that Ms. Witherspoon (star of Wild and Legally Blonde) “literally stole my magnolia” – possibly after receiving a gift of a Magnolia Collection necklace from Weingartner’s publicists. Weingartner filed a copyright- and trademark-infringement suit in federal court in West Palm Beach; she’s seeking $5 million from Draper James.

It’s not clear to me why copyright is being invoked here: copyright law protects “original works of authorship including literary, dramatic, musical, and artistic works, such as poetry, novels, movies, songs, computer software, and architecture.” The trademark case is easier to understand: trademark protects “words, phrases, symbols, or designs identifying the source of the goods or services of one party and distinguishing them from those of others.” (Emphasis added.)

On the other hand, Ms. Weingartner appears to have a shaky grasp on points of law. Her website’s long-winded “About” page says “the Magnolia flower” is ‘'Jordann Jewelry’s signature copyrighted trademark.” A lawyer, or any skilled proofreader, would have spotted the problem right away: there’s no such thing as a “copyrighted trademark.” And “signature” is just redundant.

Compare the trademark filing for Draper James, which styles itself a Southern-inspired “lifestyle brand,” (“It’s a return to pretty clothes,” Ms. Witherspoon told the Wall Street Journal last October. “We don’t do black.”) The company – which is based in New York City, by the way – sells girlish women’s clothing and accessories – including jewelry – as well as home décor and gifts.

The lawyer who wrote the application cannily avoided calling the symbol a magnolia; instead, it’s “Daffodils, iris (flower); Other flowers.” People, this is why you hire a good lawyer to do your trademark filing: I’d be willing to bet that if she ends up in court, Ms. Witherspoon will just widen her eyes and say, “Magnolias? What magnolias?” Bless her heart.

That said, the cursive monogram is just a little too close to Jordann’s for legal comfort.

When DraperJames.com launched, in May 2015, I wasn’t thinking about monograms or magnolias. I was thinking about Draper’s & Damon’s, which was founded in 1927 by Virginia Draper as “Draper’s Studio of Modes.” Today the company is headquartered in Irvine (Orange County), California, and has stores in Arizona, California, Florida, Texas, and Virginia. Draper James has just one brick-and-mortar location, in Nashville, but Ms. Witherspoon has spoken on the record about her plans for more stores. Will a Draper James in, say, Dallas confuse Draper’s & Damon’s customers in Dallas?*

Although the stores’ names may be similar, their target markets and merchandise probably won’t confuse many shoppers. 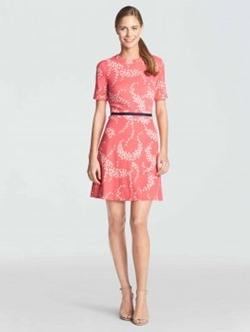 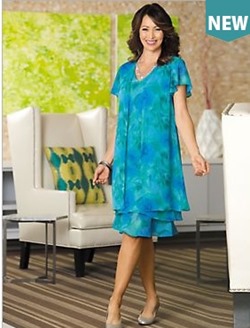 Draper’s & Damon’s: “My granddaughter’s getting married, and frankly, I never liked her very much.”

* Just to make things a little more confusing, a draper is “a dealer in cloth or clothing or dry goods.”

Posted at 06:01 AM in Confusion, Design, Fashion, Jewelry, Names in the News, Naming, Retail, Trademark | Permalink