When a certain attention-seeking real-estate impresario came to Chicago for an ill-fated rally last week, a certain local institution, The Wieners Circle, relished having a little fun. (Daily Kos) 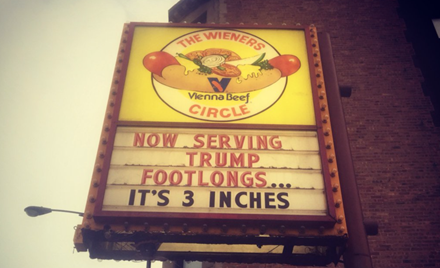 “From the very first moment I heard of the .io TLD a few years ago, I thought it was absolutely fantastic. The geek in me just really responded to the idea of a domain name that ended in IO - the input/output connotation seemed like a perfect fit for web services.” In praise of the .io domain extension. (Russell Beattie)

The most popular domain extension isn’t .io, however. And it isn’t .com. Nope: it’s the country code of a tiny island that belongs to New Zealand. And registration is free. (Mashable, via Catchword)

A map of the United States that maintains the outlines but shifts all the states around. (xkcd) 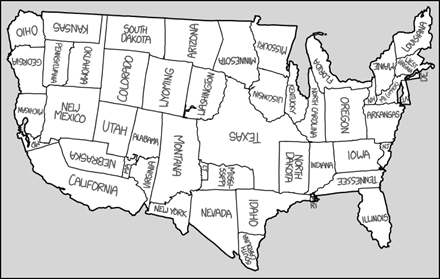 English spelling makes some sense, some of the time, writes Anne Curzan. (Lingua Franca blog) Tangentially, I like this comment on Curzon’s piece:

French pronunciation is very simple; drop the last 14 letters in every word, unless there are fewer than 14, in which case drop 17. Replace all dropped letters with a sigh.

A color thesaurus that began as a collection of words. (Ingrid Sundberg)

Why is forehead-covering hair called “bangs”? No one really knows, but the speculation is interesting. (Mike Pope) How “lol” became a punctuation mark. (The Atlantic)

How we describe different types of rhymes. (OxfordWords blog)

An epitaph for the Toyota Scion, “the little brand that tried.” (Siegel + Gale)

Bill Simmons, who was ousted by his ESPN overlords from the sports-and-pop-culture site Grantland (which ESPN later shut down, to the general wailing and weeping of the site’s many fans), is starting a new site that promises to be similar to Grantland. He’s calling it The Ringer. Here’s his account of how he arrived at the name, apparently without any professional help, poor fellow. (Hat tip: Lance Knobel)

And for those of you who, like me, care about journalism and its future, here’s “Confessions of a Sponsored Content Writer,” by Jacob Silverman for The Baffler. I hope he was well paid for it, because it’s dynamite, but given the doleful state of affairs he reveals, it’s unlikely. Here’s a tiny excerpt:

But as journalists imitate advertisers and advertisers imitate (and hire) journalists, they are converging on a shared style and sensibility. Newsfeeds and timelines become constant streams of media—a mutating mass of useless lists, videos, GIFs, viral schlock, service journalism, catchy charts, and other modular material that travels easily on social networks—all of it shorn of context. Who paid for this article, why am I seeing it, am I supposed to be entertained or convinced to buy something? The answers to these questions are all cordoned off behind the algorithmic curtain.

I had a Scion xB, and I remember thinking when I bought it that I was presumably not the demographic that the company was aiming for. The fact that it was basically a Toyota Camry with a different body was actually part of the appeal to me, although I doubt that this fact was considered useful in marketing the brand.

The French spelling guidance made me literally lol. (Do we need some sort of retronymic way to indicate that "lol" is intended literally? Hmm.)