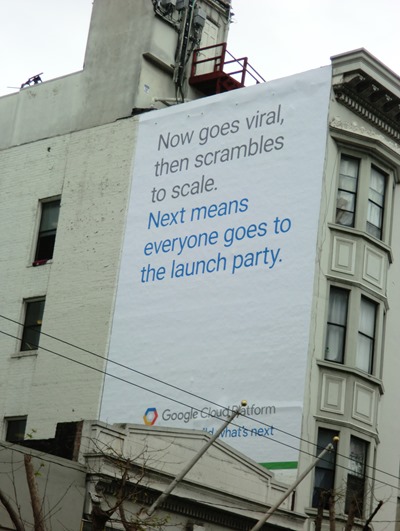 1. Read now and next as nouns (examples of anthimeria, or functional shift).

2. Now = focused on the short term. Businesses that focus only on what’s happening now will at some point in the future have to scramble to scale (= get bigger).

3. Goes viral = gets a lot of people talking, usually through social media. (Talking, not buying.)

4. Next = focused on the near future.

5. The launch party. Businesses that focus on what’s happening next are successful; they pocket huge venture-capital investments and thus have enough cash to throw lavish, self-congratulatory launch parties to which they invite all their employees, not just the big shots.*

This is some high-level Silicon Valley Speak, also known as bullshit. It’s part Zen koan (what is the sound of one now imploding?), part self-conscious language “disruption,” part (I suspect) editing by committee.

For further insights, I refer you to Nick Asbury of the London branding agency Asbury & Asbury, who wrote recently about “hashtag-driven brand lines that make no sense,” like Stella Artois’ “Be Legacy” and Lenovo’s “The Do Inside.” (I’ve written about that Lenovo tagline myself.)

To be fair, there’s a valid reason for brand lines to be ungrammatical. Their job is to disrupt language and therefore become jagged and memorable – look at ‘Beanz Meanz Heinz’.

But if all slogans are disrupting language in exactly the same way, by nouning verbs and verbing nouns, you know a certain groupthink has set in. And that’s the opposite of disruptive – it’s mindlessly conventional.

A fetish for hashtags is largely to blame, driving brands to try to capture ‘big’ thoughts in a few characters, and usually saying nothing as a result – all in the semi-mystical belief that it will inspire customers to join in a conversation.

More about the magical thinking around “disruption” – this time from me – here.

* Admittedly tangential, but I find it depressing that “everyone goes to the launch party” is identified here as a worthy business goal.

Posted at 06:00 AM in Advertising, Anthimeria, Jargon, Signs, They Said WHAT???, Zen | Permalink

My years of doing legal review of tech companies' documents have left me with no patience for this kind of self-referential, self-congratulatory jargon. I swear my blood pressure spikes every time I visit the bay area and see signage like this.

My main difficulty was that, having successfully read now as a noun, I couldn’t decide whether I was supposed to do the same with then. The fact that there’s a comma rather than a semicolon there points to no, but the familair collocational pairing of now and then (e.g., “That was then; this is now”) makes it a salient possibility.

Q. Pheevr: Good point about "then"! Now (heh) that I think about it, that was probably my first trip-up as well.

Perhaps I'm just too insider, but once I'd grokked that "now" and "next" are nouns, this all makes perfect sense to me. If we rephrase this using the much-quoted words of the hockey star Wayne Gretzky, it becomes "I skate to where the puck is going to be, not where it has been."

> I find it depressing that “everyone goes to the launch party” is identified here as a worthy business goal.

That's synechdoce: the fact of a launch party means you've actually launched. In fact, most startups never get that far. The point of a wedding is not the wedding, but the marriage. (Also sometimes forgotten by the participants, but oh well.)