Republicans are voting in another primary election tomorrow, this time in South Carolina. So let’s take a look at a couple of the candidates’ slogans, shall we?

Ted Cruz, a U.S. senator from Texas, has said that God “speaks to me. Literally. In my head” and that “any president who doesn’t begin every day on his knees isn't fit to be commander-in-chief of this nation.” He won the Iowa caucus earlier this month, finished third in the New Hampshire primary, and is currently trailing Donald Trump by a slim margin in South Carolina polling.

His slogan is a play on his name and the word trusted. 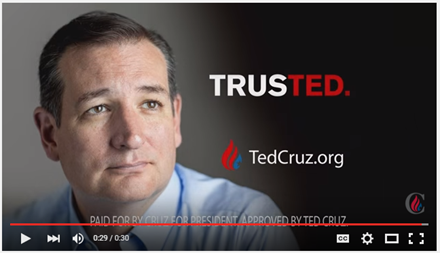 TRUS in white, TED in red.

And what else might TRUS signify? Here’s the top result on Google (from the Canadian Cancer Society):

A transrectal ultrasound (TRUS) is an ultrasound technique that is used to view a man's prostate and surrounding tissues. The ultrasound transducer (probe) sends sound waves through the wall of the rectum into the prostate gland, which is located directly in front of the rectum.

Recall that it’s thanks to Dan Savage that the top result when you Google Santorum – the last name of one of this year’s also-ran, Christian-conservative GOP candidates – is this:

Mark Liberman of Language Log posted a political cartoon by Nick Anderson that put another spin on the slogan: 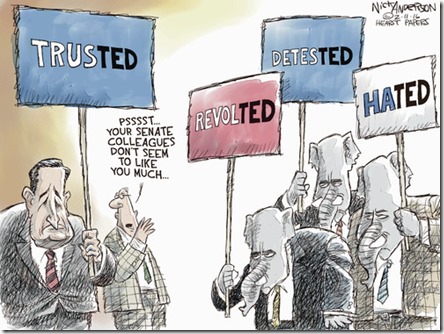 Cruz is famously unpopular among his Washington colleagues – and indeed among almost everyone who’s ever known him.

As Liberman notes, the -TED suffix lends itself to adjective-formation, as the (RED) in the Product Red campaign did a decade ago.

But Cruz isn’t the only TRUSTED candidate in the race. 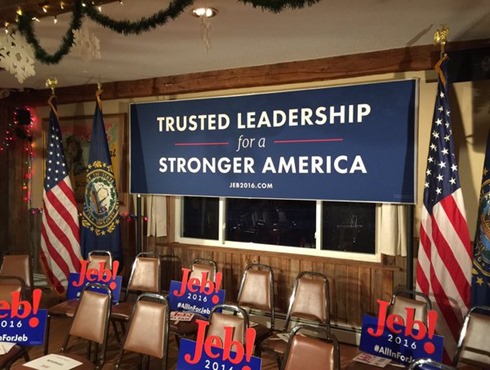 This is the current slogan for the Jeb! Bush campaign: “Trusted Leadership for a Stronger America.”

No wonder there are so many undecided voters. “Gee, Martha, remind me which one is the trusted candidate – the one-word, two-color, rectal-acronym guy or the earnest, wordy guy with the desperate exclamation point?”

Posted at 08:54 AM in Acronyms, Politics, Slogans and Taglines | Permalink