I zoomed in to get the shot, but it’s still hard to read, right? Sorry about that. Here, I’ll make it a little easier:

THIS WAS NEVER SUPPOSED TO HAPPEN.

You’re on a road. It was designed so people could go pretty fast. But clearly that’s not the case. It’s weird we’re even having this conversation right now – and not weird in a good way. Look, we’re not saying we can just snap our fingers and make all this go away. But we are saying you can just push a button and make it go a little better, and the more people who push it, the better things will go.

RIDING IS THE NEW DRIVING

Finally, down at the bottom, a modestly sized Lyft logo.

What was San Francisco-based Lyft – a ride-“sharing” rival of Uber – thinking? Did its agency of record, Colorado-based Made, convince Lyft that it was a good idea to post a rambling manifesto 45 feet in the air, where even a slow-walking pedestrian would be able to read only the headline?

And what about that headline? What, exactly, was never supposed to happen? Auto traffic? (There was virtually none on the morning I took the photo.) An unreadable billboard? A pink logo? What’s the message? Where’s the benefit?

Then there’s “this conversation” that “we’re even having.” Really? A conversation? Weird, but not in a good way?

And that’s not the last word in the Lyft manifesto. Across the bay in Oakland, I spotted another Lyft billboard. This one is five stories high –  making it even harder to read – and situated just four blocks from Uber’s future headquarters. 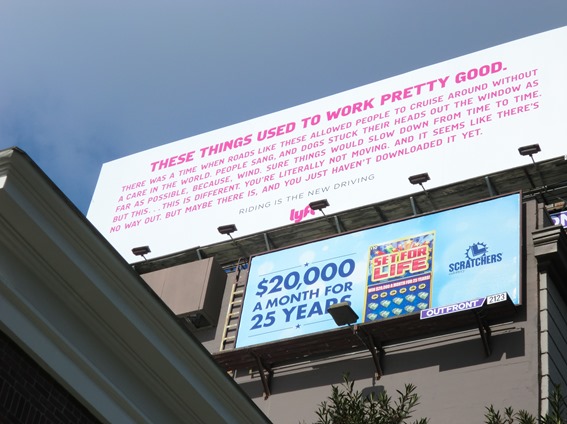 There was a time when roads like these allowed people to cruise around without a care in the world. People sang, and dogs stuck their heads out the window as far as possible, because, wind. Sure things would slow down from time to time, but this … this is different. You’re literally not moving. And it seems like there’s no way out. But maybe there is, and you just haven’t downloaded it. Yet.

RIDING IS THE NEW DRIVING.

A mere (!) 84 words this time, but no less cringeworthy, starting with “pretty good” instead of “pretty well” in the headline and the missing comma after “Sure.” The writing is slack and colorless (“there was,” “there is,” “this is,” “things”). The manifesto rails against bumper-to-bumper traffic, but traffic on Broadway, a four-lane thoroughfare, almost always travels the the maximum speed of 25mph. (You want traffic misery? Try the westbound Bay Bridge at 7 a.m. on any weekday.) Even at that stately pace, it’s impossible to read the ad copy from your car. I even had trouble reading it when I parked, crossed the street, stood directly beneath the sign, and craned my neck skyward.

Effective outdoor advertising, which is hard to find these days, is short, clear, and memorable. That’s it. Save the manifesto for your About page or a letter to the editor.

As far as I can tell – really, the writing here is just godawful – both of these misbegotten Lyft billboards address potential paying customers who are stuck in traffic and dreaming of a mythical auto-libertarian Golden Age. (Although if that is indeed the target audience, the ads would be more effectively placed on the Los Angeles freeway system, or, as I’ve said, the Bay Bridge.) Summoning a Lyft car may temporarily relieve those unhappy drivers’ stress, but it doesn’t reduce the number of cars on the road. Nor does it make life less stressful for the Lyft driver, who’s battling the same traffic snarls and also hustling three or four additional gigs to make ends meet.

To recap: Bad headlines. Badly written copy, and too much of it. Bad strategy. Flawed logic. Grade: F.

Meanwhile, over at That Other Ride-“Sharing” Company, there’s a new logo and visual-brand system. Read the fawning story. UPDATE: Read Brand New’s review of the new logo.

Posted at 06:00 AM in Advertising, Bad, Oakland, San Francisco, They Said WHAT???, Transportation | Permalink

If I'm stuck in traffic, the first thing that occurs to me is not going to be "Hey, let's read all the billboards!"

@CGHill: I'd hate to see one of Lyft's PowerPoint presentations.

The lengthy message might assume that you are stuck in traffic-- and therefore have time to read it, if you are so inclined. Otherwise, I have no idea what they're thinking.

The bizarre thing is that the Lyft slogans on the Made website are excellent - e.g., "Ride Between the Lines," "The Rest of the Way." How they got from there to a mouthful of drivel is a puzzlement.

@Jessica: And those ads you mention are also on view throughout the Bay Area. I like them, too: They're clear, catchy, distinctive, and brand-appropriate. I have no idea why the company (or the agency? maybe not Made?) thought the manifesto approach was worth the gamble.

I learned a long time ago that outdoor advertising should be like a 10-second commercial (today, more like a 5-second spot.)
To the other valid criticisms, I add "offensive" and "presumptuous"—that the advertiser assumes I would try to to figure out what they're trying to say.
Other than a wasted media budget, it shouldn't do Lyft much harm. From the advertising, I couldn't tell who they are or what they're selling.

Not great copy, I agree. But you did make it worse by quoting it as 'it seems like there’s not way out' when the billboard does say 'no way out'. Tut tut.

However.... It would seem that a lot of people saw the Lyft logo at the bottom and looked it up to see what all the drivel said... It even got someone to write an entire article about it. Maybe they did succeed after all?

Michael: A lot of people? Hard to say. I looked at it because a) looking at advertising is what I do, and b) I thought it might be a lunatic rant from some fringe political candidate, and that sort of thing can provide fleeting amusement. I couldn't discern the Lyft logo until I got out of the car and stood directly beneath the sign.

What a terrible terrible campaign.

And "Ride Between the Lines" is so clever!!!

There's a "These Things Used to Work Pretty Good" billboard by the FDR drive in Manhattan now as well. I drove by it twice and of course had no way to read the text.