Speaking of the Super Bowl: Twenty years ago, Seinfeld introduced “spongeworthy” to the lexicon of dating. Now the Red Lobster restaurant chain has coined “lobsterworthy,” a reference to a raunchy line in “Formation.” A family-friendly (yet still controversial) version of the song was performed by Beyoncé during the Super Bowl halftime show.

Why brainstorming – at least what passes for “brainstorming” in most businesses – doesn’t work, and what to do instead. (Hat tip: The Name Inspector.)

All over the United States, there are streets named No Name. 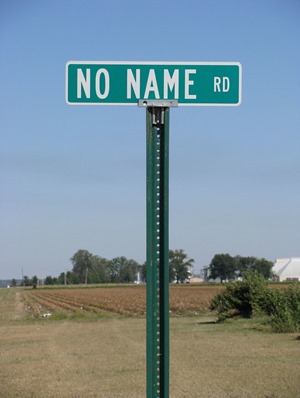 A No Name Road in Mississippi. (Via Atlas Obscura.)

“Comfortable names are the least effective,” and other wisdom about naming from Dan Cohen, senior namer at branding agency Siegel + Gale.

What would the person who named the walkie-talkie have named other products?

How the misguided avoidance of a sentence-ending preposition led to a truly awful slogan for the new movie Deadpool.

Ben Zimmer on the etymology of the British epithet wazzock …

“They are simple words, common words, but words whose origins are a mystery: he, she, girl, pimp, ever, gawk, yet. We use these words every day, but Liberman has been working for thirty years to unearth their roots.” A profile of Anatoly Liberman, who at 79 is working on “one of the greatest achievements in the annals of lexicography: a history, as complete as possible, of some the last words in the English language whose origins remain unknown.

Why do we “endorse” candidates?

Donks, rat-holing, bird droppings, and other secret jargon of casinos.

The marketing language of organic food.

The New York Times crossword puzzle “uses one-third fewer non-English clues and answers than it did at its peak in 1966, and makes two-thirds fewer international references than its peak in 1943.”

The movement to kill the phrase sharing economy. (More on “sharing” from me in the Visual Thesaurus.)