« How Sony Got Its Name | Main | January Linkfest »

Feardom was Word Spy’s word of the year for 2015, topping a list of neologisms that includes manspreading, gig economy, goat cheese curtain, and sea-lion. (Sea lioning was a Fritinancy word of the week in 2014.) Word Spy cites a March 21, 2015, article in The Economist, “Let Feardom Ring,” about Bill C-51, an anti-terrorism bill introduced by the Conservative government of Stephen Harper and passed later that year. (Still later in the year, Harper was voted out and the Liberal Justin Trudeau voted in as prime minister.) 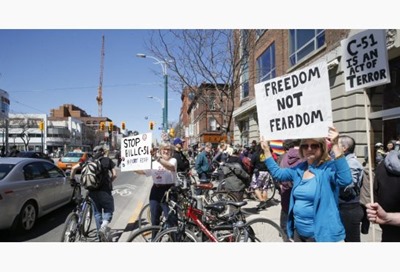 “Freedom not feardom”: C-51 opponents protesting in Toronto. Photograph via The Star. The press secretary for the Canadian minister of public safety said in a statement that the bill’s intent is “to protect Canadians against jihadi terrorists who seek to destroy the very principles that make Canada the best country in the world.” An opponent countered that the bill would turn the Canadian Security Intelligence Service “into a secret police force with unlimited oversight and no accountability.”

Feardom antedates the Canadian protest, however: Word Spy provides a citation of the #Feardom Twitter hashtag from 2014 – it’s still in use – and of usages from 2013 and 2005. Urban Dictionary has two entries from 2008.

Feardom is also the title of a 2014 book by Connor Boyack, founder and president of the Utah-based libertarian think tank Libertas Institute; the book’s subtitle is “How Politicians Exploit Your Emotions and What You Can Do to Stop Them” (the politicians, presumably):

What do history’s most notorious despots have in common with many of the flag-waving, patriotic politicians of our day? Both groups rise to power through the exploitation of fear. Sometimes the fear derives from a pre-existing threat. At other times, crises are created or intensified to invoke a sense of panic and anxiety where none previously existed.

This pattern is as predictable as it is destructive. The end result is the same: a loss of liberty.

But at least one group uses feardom apolitically: Feardom Fighters, which staged a one-day festival in Leeds (UK) last October. The event was billed as “a FREE day of inspirational talks, stress relieving activities and exciting exhibitions as Leeds comes together to create an uplifting day that  you will not forget.”

In other word-of-the-year news, the American Dialect Society selected singular they as its 2015 WOTY, singling out “its newer usage as an identifier for someone who may identify as ‘non-binary’ in gender terms.” The ADS selection process this year was notable for its inclusion of formerly taboo words and even a suggestive emoji; to read more about that story, see my post for Strong Language.