Word of the Week: Crowler

Crowler: A 32-ounce or 750-milliliter aluminum can filled to a customer’s order with beer or cider at a brewery. Also the name of the machine used for making the cans. A blend of can and growler (a 64-ounce vessel, traditionally made of glass, for take-home beer). 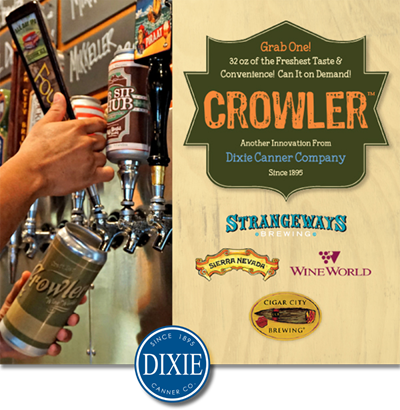 “Cans have taken over as the craft beer container of choice,” wrote Loren Green in Growler magazine on March 13, 2015:

It’s not the death of the glass growler yet, but options are increasing for other take home beverages formats. Last year Oskar Blues (Longmont, CO) teamed up with Wisconsin Aluminum Foundry Company (Manitowoc, WI*) and Ball Packaging (Broomfield, CO) to create a stand-alone can-sealing machine for 32 oz. and 750 ml cans, dubbed Crowlers. The cans, a trademark of Ball Packaging, are sealed much like canned vegetables at home via a countertop unit not much larger than a sewing machine, but with a CO2 purge to prevent oxidation. Since implementing them in their own taproom, over 80 additional breweries are trying the new invention.

The capitalization of the word varies. In 2014 and 2015, Ball Packaging successfully registered two trademarks for Crowler – one for the machine and one for the can – which means the word merits a capital C. But in an April 2015 article, “Crowlers Are a Kick in the Glass,” CraftBeer.com treated crowler like a generic term:

A crowler starts its life as an open can—one without a lid. It is then hand-labeled and the beer name is written on the label. In order to fill it, a tube is placed from the beer faucet to the bottom and the vessel is filled with CO2. After purging, the empty crowler is then filled with beer and quickly seamed. The end product is a 32-ounce can of beer.

That’s not to say it’s been completely smooth sailing for Crowlers. Last September, the Texas Alcoholic Beverage Commission (TABC) confiscated a Crowler machine from the Cuvee Coffee Bar in East Austin and cited the business for “unauthorized manufacturing.” The conflict centered on “semantics,” according to Austin360’s spirits blog, which quoted a TABC spokesman saying that canning “is looked at as a manufacturing process, and a growler is looked at a little more leniently under the law.” (Hat tip: Name Inspector.)

Related: Growlette, a 32-ounce glass growler. (History of growler there, too.)

* A place name familiar to viewers of the Netflix documentary series “Making a Murderer.”

Posted at 07:22 AM in Beer, Neologisms, Portmanteaus, Trademark, Word of the Week | Permalink

So far I haven't heard "crowler" in the wild, but I'll ask my beer-swilling children if they know this term. I've never really embraced the "beer to go" idea behind growlers (etc.), but that's prolly just me being old and stuff.