« Word of the Week: Cinemagraph | Main | How Sony Got Its Name »

Start with “Malheur,” the name of the wildlife refuge established in 1908 by President Theodore Roosevelt. Pronounced MAL-hyure by locals, it’s a French word meaning “misfortune.” The refuge took its name from nearby Malheur Lake. (There is also a Malheur River, but it doesn’t drain into Malheur Lake.) According to a Wikipedia entry,

The name was attached to the river by French Canadian voyageur trappers working for the North West Company on the Snake County Expeditions of Donald Mackenzie as early as 1818 for the unfortunate circumstance that some beaver furs they had cached there were discovered and stolen by Indians. The name first appears in the record in 1826 when Peter Skene Ogden, a fur trapper with the Hudson’s Bay Company, referred to it as “River au Malheur (from rivière au Malheur, literally: River of the Misfortune)” and thereafter as “Unfortunate River.” 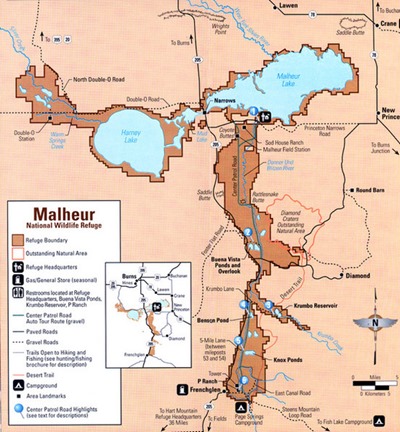 The greater misfortune befell the Paiute people who had inhabited the region for centuries. In 1872, President Ulysses S. Grant established the Malheur Indian Reservation for them, setting aside a small portion of their former territory. But European-American settlers soon began illegally grazing their cattle on the reservation, and in 1879 the reservation was closed and its Native inhabitants forcibly removed.

Side note: Place names that reflect misfortune or tragedy are rife in the United States, especially in regions beyond the original 13 colonies. An Instagram account, Sad Topographies, documents many of them, in the U.S. and elsewhere, including Crying Child Island, Miserable Lake, and Dubious Reservoir. (Consider also Death Valley, Chagrin Falls, and the Great Dismal Swamp.) “[T]he register of global place names is skewed toward optimism and progress,” writes Frank Jacobs in an essay about the Instagram account. “Yet there is a small, scattered number of toponyms that delight us by their unvarnished expression of downheartedness, defeat and despond.”

I find myself wishing for a single word to describe these glum place names. Tristoponyms, perhaps?

Onward, from geography to political science:

The current usurpers of the refuge are calling themselves Citizens for Constitutional Freedom, a name apparently invented on Saturday night, after the takeover. Ammon Bundy, acting as spokesman, told a news conference that he and his group “have a lot of work to be able to unwind the unconstitutional land transactions that have taken place here.” (He did not seem to be referring to the land grab from the Paiutes. That would require a more nuanced sense of irony than is evident here.)

“Citizens” and “Constitution” or “Constitutional” appear in the names of many right-wing U.S. organizations that share a fierce attachment to a few Constitutional rights (specifically the right to bear arms and, in certain limited senses, the right to free – or, more accurately, insensitive – speech). The Facebook page of one Citizens for Constitutional Government, in Pennsylvania, describes the group as “American Patriots” who “promote individual freedom and responsibility.” The Facebook page of another Citizens for Constitutional Government, in Wyoming, has as its motto “Because Liberty Matters.” Citizens Constitutional Caucus, in North Carolina, seeks to elect representatives who are “Constitutionally grounded, Conservatively molded, and Christian inspired.” Citizens United, a conservative lobbying group, became famous (or notorious) for the U.S. Supreme Court ruling that removed restrictions on campaign spending.

“Citizens for Constitutional Freedom” may be what the Oregon group calls itself, but what should the rest of us call them? News stories have used the neutral occupiers and protesters as well as the more provocative militia (technically “an army composed of ordinary citizens rather than soldiers”) and militants.

Then there are the satirical, deliberately inflammatory coinages that have sprung up on social media, many of them employing slurs on rural people (“trailer trash,” “yokel,” “bubba”) and references to international militant extremists. Language Log compiled many of them, including:

Like the militant Islamist extremists, Ammon Bundy claims to be following instructions from a deity.

This tweet assumes familiarity with the TV sitcom “Married with Children” (1987-1997), in which the patriarch was Al Bundy (portrayed by Ed O’Neill).

Updated to add: The noms de guerre of the Oregon protestors include “Fluffy Unicorn” and “Captain Moroni.”

For a more serious take on the story, I refer you to these articles:

What’s Happening in Oregon Is Nothing Less Than Armed Sedition (Charles P. Pierce in Esquire)

Protesters in Oregon Seek to End Policy That Shaped West

Bird-watching, Patriotism, and the Oregon Standoff (op-ed by Peter Cashwell in the New York Times)

Posted at 11:11 AM in Current Affairs, French, Names in the News, Naming, Toponyms | Permalink

Thank you, thank you for your sharing on the less than humorous history of this place before its current misfortune.

There's probably an Instagram for happy place names, too - or maybe should be. There's a town in Scotland we went through called Rest And Be Thankful, and it ... made me wonder every time I heard it. (Was that "be thankful" bit an order, or...?)

@Tanita: Rest and Be Thankful was made famous by William Wordsworth, who borrowed the town's name for the title of a sonnet. http://www.arrocharheritage.com/HistoryOfRABT.htm

I've never been to Scotland, but I've seen "Rest and Be Thankful" inscriptions on benches in spots around the Bay Area that afford especially good views.

One alternative might be odynonyms (<<> ὀδύνη odýnē ‘sorrow’), but the other compounds with that root in English relate to physical pain (odynometer, odynophagia, anodyne). And the devil knows what a derivation from οἰκτρός oiktrós ‘lamentable’ should look like; ectronyms doesn't seem to strike the right note.