Winchester picks up the story:

The employment of the name Sony came about entirely because of the American market. Morita had found that almost no one in the United States could pronounce either Tokyo Tsushin Kogyo [Tokyo Telecommunications Engineering Company], the company’s formal name, or its diminutive, Totsuko. Something easier was needed, he wrote in a company memo. Something short; four-lettered, if possible. Something memorable, like “Ford.”

The Totsuko principals explored only modestly, searching either for an existing word or for an arbitrary word – Kodak, created at the whim of George Eastman fifty years before, seemed an ideal. They thought of two-letter words, with which the Japanese language abounds, but to which English mainly consigns prepositions. They considered three-letter combinations (NBC, CBS, NHK). Perhaps their own existing initials, TTK, might work. But then they began to think of four-letter combinations. The name of Ford kept striking Morita as ideal, as being brand perfection – so he and [company co-founder Masaru] Ibuka combed through their various dictionaries. As to whether they had a Latin dictionary to hand, corporate history is silent; but somehow or other they eventually came across the Latin word for sound (the ultimate product of all their engineering), and liked what they found: the Latin word sonus. Five letters, true, but very nearly perfect.

And how did sonus become Sony?

Since 1928, when Al Jolson had sung, “Climb upon my knee, Sonny boy, / Though you’re only three, Sonny Boy,” the term Sonny had won widespread affection, especially in America. Occupation forces, now three years gone, would throw sticks of Wrigley’s gum to children, calling out, “There you are, sonny!’'” The word had pleasing connotations. It echoed the Latin word. It was easy to pronounce. It had universal appeal. And to make it into a Ford-like quadrilateral just a small modification in pronunciation and spelling was needed. Thus, in 1955, the word Sony. was born. The word. The company. And history.

Bulova refused to use the Sony name on its products, Winchester writes. “Who ever heard of Sony?” the watch company’s president asked. Akio Morita’s reply: “Half a century ago people would have asked – who ever heard of Bulova?” His parry failed. And thus the first North Americans to encounter Sony transistor radios were not Americans but Canadians: the new and improved TR-55 made its debut in Winnipeg in the summer of 1955. 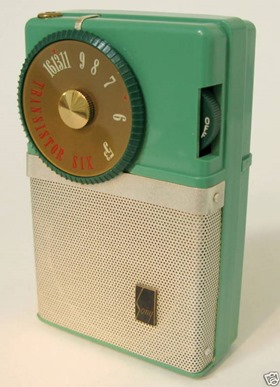 Winchester’s Sony account includes the story of another linguistic innovation. “Company lore has it that Sony created the word pocketable” to describe its TR-63 radio, introduced in 1957, Winchester writes. (The first Sony transistor radio sold in the U.S., it cost $39.95, the equivalent of $337 in 2015 dollars.) In fact, writes Winchester, “the word made its first recorded appearance in the English language as far back as 1699.” (In a dictionary of canting, or thieves’ jargon, according to the OED.) And the radio was pocketable only if you were a Sony salesman wearing a modified shirt with enlarged breast pockets.

* Subtitle: Silicon Chips and Surfboards, Coral Reefs and Atom Bombs, Brutal Dictators, Fading Empires, and the Coming Collision of the World’s Superpowers. Winchester is also the author of two books about the making of the Oxford English Dictionary, The Professor and the Madman (1998) and The Meaning of Everything (2004), as well as many other excellent books.

Posted at 08:27 AM in Books, How They Got That Name, Japanese, Latin, Naming, Radio, Technology | Permalink

I find it hard to believe that "almost no one in the United States could pronounce ... Totsuko". But I do remember wondering how to pronounce the name "Sony" when I first came across it (in the late 60s or early 70s): "sunny" (unlikely, though seems to be what the company originally intended), or "soh-nee" (rhyming with "bony"), or maybe even "saw-nee"? And I certainly did not connect the name with "sound" or "sonus". English doesn't work that way. I suspect that the real reason for not using "Totsuko" was that it was clearly a Japanese name and the company was aware of likely racist or, more generally, xenophobic resistance to such a name among American consumers in the 1950s, not to mention lingering animosity from World War II (and WWII movies). "Sony", while unusual, does not strike one as being especially Japanese, which certainly would have worked in its favor. Today, of course, Japanese products are highly respected, and no one has problems with names like "Yamaha", "Hitachi", or "Mitsubishi" -- either pronouncing them or buying them.

Rolig: I don't speak Japanese, but I have observed that many English-speakers have trouble with the /ts/ consonant blend -- "tsar," for example, becomes "zar" or "sar." You make a valid point that the mid-1950s was too soon after World War II for Americans to look favorably on a Japanese brand name.

Nancy, it's true that an initial ts- can give Americans trouble, but we have no problem with an intervocalic -ts-, as in "Patsy" or "hotsy-totsy" (not to mention such borrowings as "pizza", "matzoh", and "Katzenjammer"). Anyone who can pronounce "Massachusetts" should be able to pronounce "Totsuko". I think too much is made of Americans' difficulties with unusual words.

Another thought occurs to me, too: "Sony", with its "-y" spelling is distinctly un-Japanese -- "y" is only used in English transliteration of Japanese before a vowel (Yamaha, Tokyo), never at the end of a word to represent the "ee" sound.

Isn't it the "u" in Totsuko which is the issue rather than the "ts"? As I understand it "u"s (and "i''s) are generally voiceless in Japanese if, as is the case here, the consonants immediately before and after it are voiceless, and so the pronunciation should be more towards "TOATSco" than "toatSUEco".