« Word of the Week: Crowler | Main | Squirmishing with Sarah »

It’s been a while since I’ve written about nearly sweary advertising here. (It’s not as though I’ve taken a vow of purity: I’ve been shoveling that stuff over at the Strong Language blog.) But when I spotted a trifecta of fecal facetiousness within a span of a week, I just couldn’t hold back.

Reporting from Melbourne, where he’s on temporary teaching assignment, Ben Yagoda sent news of a promotion for Grill’d, a chain of Australian burger restaurants. 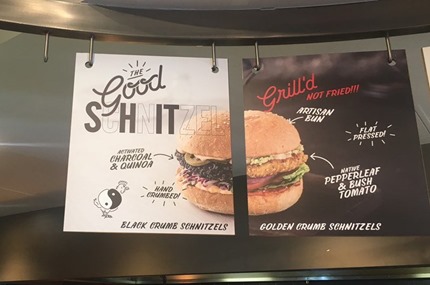 Look closely, and you’ll see that it’s not good shit, or not only good shit, it’s good schnitzel (“very popular here,” says Ben). Schnitzel is a thin cutlet, traditionally of veal, that’s breaded and fried (although of course Urban Dictionary will tell you another story). According to this Grill’d ad, one version of schnitzel consists of charcoal and quinoa. After all, why bother with briquets when you can eat the charcoal directly?

It’s been 15 years since the release of the original Zoolander film, but the long wait for Blue Steel is finally over. The sequel, which opens February 12,  isn’t called Son of Zoolander or Zoolander II but rather Zoolander No. 2. And a series of fake fragrance ads turns the grade-school euphemism into Chanel-worthy bullshit. The slogan, by the way, is “Eau no.” 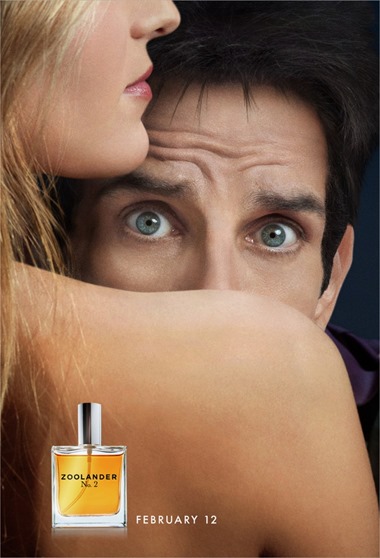 Which I confess I interpreted this way:

Good to know I’m not the only one.

P.S. An alternate campaign positions the movie as a romance. In tweeting about it, a social-media intern at 20th Century Fox be-pretzeled him- or herself to avoid ending a sentence with a preposition, as common sense dictates.

A love for which is worth killing. #Deadpool pic.twitter.com/d3jQdKSmOZ

As I said on Twitter, there are some slogans up with which I will not put.

Re Grill'd, as I always say, just because you can doesn't mean you should. Moreover, in a world where E.coli and other food-borne bacteria are rampant, please keep the word "shit" away from my food.

Now with activated charcoal! It's the cause of, and solution to, farts.